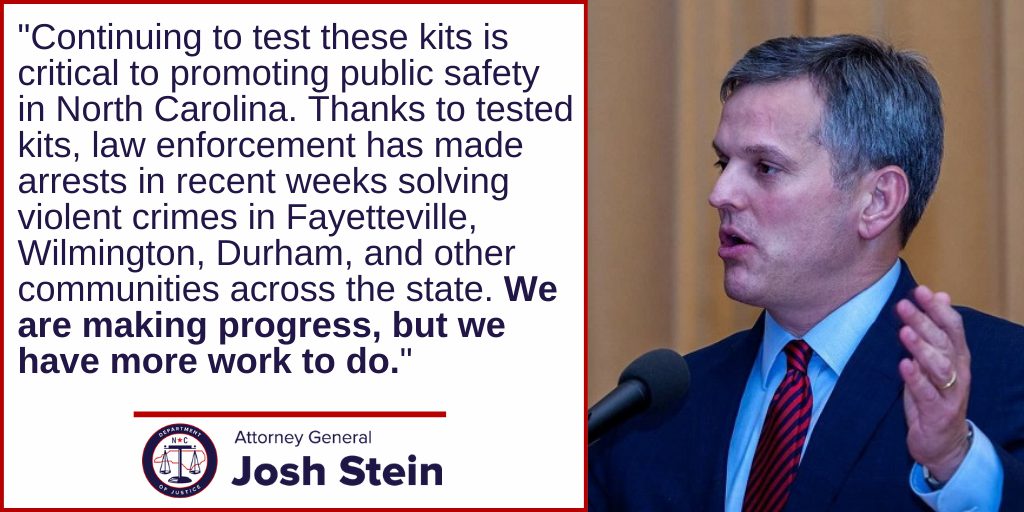 “Continuing to test these kits is critical to promoting public safety in North Carolina,” said Attorney General Josh Stein. “Thanks to tested kits, law enforcement has made arrests in recent weeks solving violent crimes in Fayetteville, Wilmington, Durham, and other communities across the state. We are making progress, but we have more work to do. That work requires additional funding and scientists. Due to increased demand across the country, the price of testing these kits at private labs has increased nearly 80 percent. And the number of new submissions to the State Crime Lab has more than doubled from last year to this year. Therefore, we need more funding to outsource the older kits and more scientists at the State Crime Lab to test the new ones. My team will continue our work with local law enforcement and the legislature to get these kits tested as quickly as possible.”

As the report outlines, the Statewide Sexual Assault Evidence Collection Kit Tracking and Inventory Management System (STIMS), which went live on Oct. 1, 2018, now includes a certified inventory of all the newly collected kits and the previously untested kits. The certified inventory in all agencies across the State of North Carolina totals 16,179 previously untested kits.

Attorney General Stein also announced that he is asking the General Assembly to make a policy change: to require that any person arrested for a violent crime against a woman have their DNA collected and uploaded to the state DNA database. Two recent arrests of alleged serial rapists in Fayetteville would have been possible decades sooner if this law had been on the books.

“We know that sexual assault often starts with assault on a female,” said Attorney General Josh Stein. “By expanding the library of DNA in the database to include those arrested for violent crimes against women, we make it possible for law enforcement officers to solve more sexual assaults. This policy change will make our communities safer.”

Other information of note is below.

Due to the above, the Department of Justice will ask legislative leaders to ensure that sufficient funds are directed to continue the important work of testing these kits. That will include: