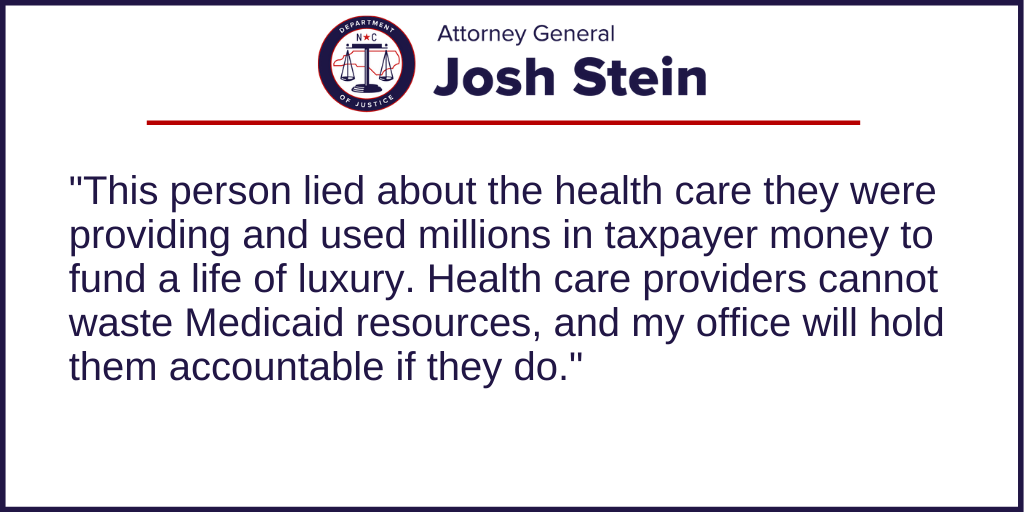 (RALEIGH) Attorney General Josh Stein announced that Latisha Harron of Las Vegas, Nevada, was sentenced to 170 months in prison and three years of supervised release and ordered to pay $300 in special assessments and $13,396,921.64 in restitution to the North Carolina Medicaid program. Harron previously pleaded guilty to charges of conspiracy to commit health care fraud and wire fraud, aggravated identity theft, and conspiracy to commit money laundering. Harron must also forfeit items including a private jet, a sports car, a pickup truck, real estate property, and designer jewelry and luxury items.

“This person lied about the health care they were providing and used millions in taxpayer money to fund a life of luxury,” said Attorney General Josh Stein. “Health care providers cannot waste Medicaid resources, and my office will hold them accountable if they do.”

She moved to Las Vegas in 2017 to live with Timothy Harron and the two were married in 2018. They failed to disclose that Timothy Harron was also a previously convicted felon. Together, they increased Agape’s fraudulent billing. More than $10 million was fraudulently billed from 2017 through 2019. The Harrons searched obituary postings and other sources to get information about recently deceased North Carolinians, and then would determine whether the deceased persons were Medicaid recipients by using an online eligibility look-up tool that was entrusted to Medicaid providers. They would then use the deceased Medicaid recipients’ Medicaid Identification Numbers to fraudulently back-bill Medicaid for up to one year of home health services.

Timothy Harron pleaded guilty to similar charges in April. The investigation and prosecution of this case was carried out by the U.S. Attorney’s Office for the Eastern District of North Carolina, the Federal Bureau of Investigation, the United States Department of Health and Human Services Office of the Inspector general, the Internal Revenue Service Criminal Investigation, and the North Carolina Attorney General’s Office Medicaid Investigations Division.