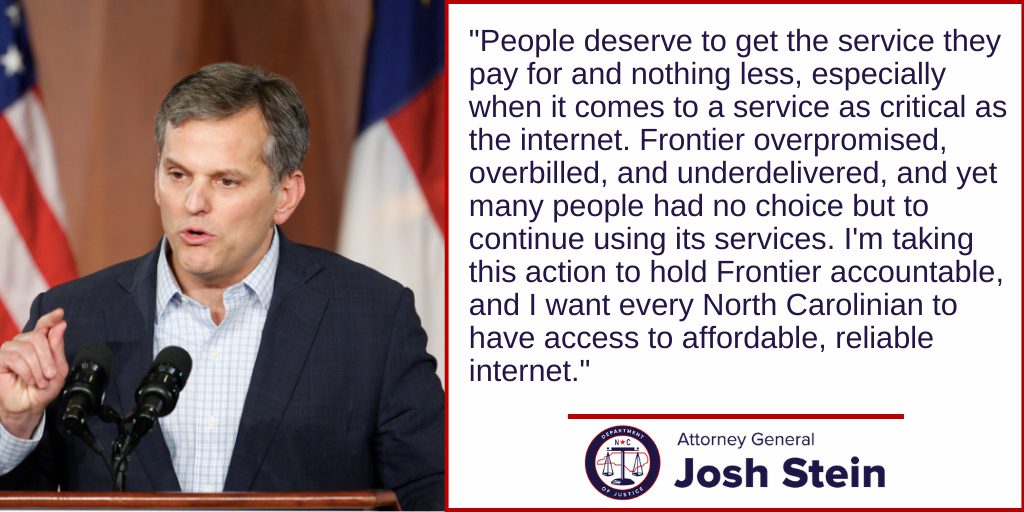 (RALEIGH) Attorney General Josh Stein today sued internet service provider Frontier Communications, alleging that the company did not provide many people with internet service at the speeds it promised them and charged many of them for more expensive and higher-speed services than Frontier actually provided. Attorney General Stein is joined in this action by the Federal Trade Commission and four other states.

“People deserve to get the service they pay for and nothing less, especially when it comes to a service as critical as the internet,” said Attorney General Josh Stein. “Frontier overpromised, overbilled, and underdelivered, and yet many people had no choice but to continue using its services. I’m taking this action to hold Frontier accountable, and I want every North Carolinian to have access to affordable, reliable internet.”

Since at least January 2015, thousands of consumers complained to Frontier and government agencies that the company failed to provide DSL Internet service at the speeds they were promised. Many consumers have complained that the slower speeds actually provided by Frontier failed to support the typical online activities they should have been able to perform at the speed tiers Frontier had sold them. Since December 2015, North Carolinians have filed nearly 400 complaints about Frontier with the North Carolina Department of Justice – at least half of these are related to Frontier’s internet service.

“We only have one choice and it’s Frontier,” said Mark Gillis, of Hot Springs, North Carolina, who filed a complaint with the North Carolina Department of Justice. “We pay for a certain speed even though it’s not very high, but the speed that we pay for, we rarely see even a fraction of.”

Attorney General Stein alleges that Frontier advertised and sold Internet service in several plans, or tiers, based on download speed but failed to provide people with the maximum speeds they were promised. The speeds consumers actually received often fell far short of what was touted in the plans they purchased. The complaint alleges that these misrepresentations and unfair billing practices violate the FTC Act and various state laws.

Attorney General Stein is joined in filing this complaint by the Federal Trade Commission and the Attorneys General of Arizona, Indiana, Michigan, and Wisconsin, as well as the district attorneys’ offices of Los Angeles County and Riverside County on behalf of the State of California.