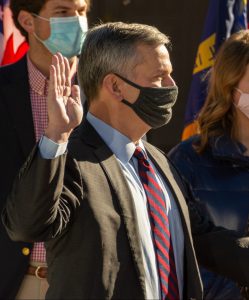 As the head of the Department of Justice, the Attorney General oversees criminal appeals from state courts to ensure that criminals are kept behind bars and innocent people are not. Stein also ensures that consumers are protected by going after scam artists and corporate bad actors. The Attorney General protects the taxpayers as well, by providing legal representation to state government agencies, departments and commissions, and by investigating and cracking down on Medicaid fraud.

Prior to being elected, Stein served as a state Senator and as a Senior Deputy Attorney General in the North Carolina Department of Justice. In the State Senate, he successfully led efforts to put more violent criminals behind bars by expanding the state’s DNA database. He also wrote the School Safety Act and legislation that banned stalking using GPS tracking devices. As Senior Deputy Attorney General, Stein worked to protect kids from online sexual predators and to help run the payday lenders charging loan shark interest rates out of the state.

AG Stein is a graduate of Dartmouth College and earned law and public policy degrees from Harvard University. He and his wife Anna have three children.