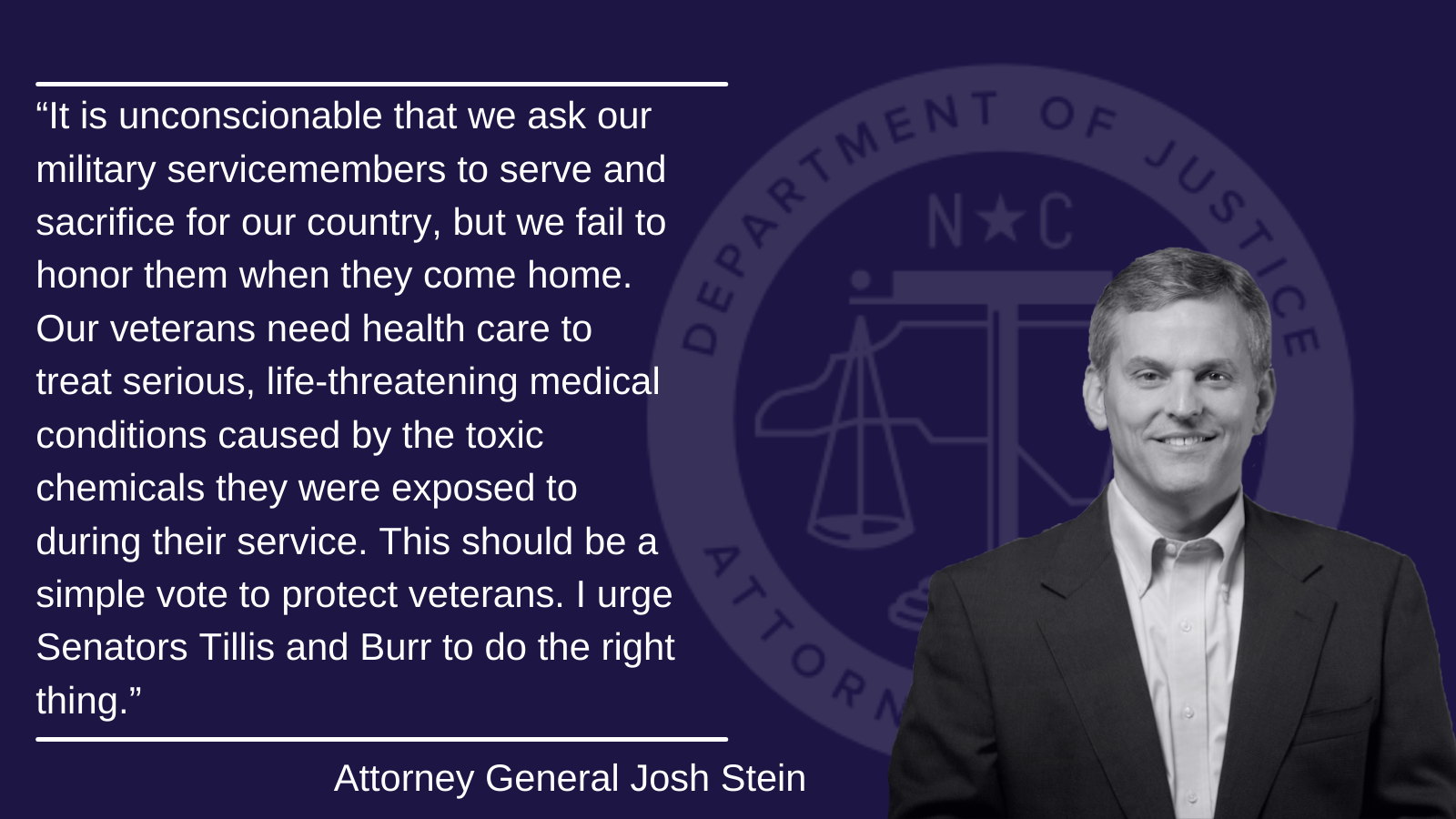 (RALEIGH) Attorney General Josh Stein today urged the U.S. Senate to pass the PACT Act (S. 3373), proposed legislation that would expand health care coverage to millions of veterans who were exposed to burn pits and other military toxins. The bill failed to pass the Senate in a July 27 vote.

“It is unconscionable that we ask our military servicemembers to serve and sacrifice for our country, but we fail to honor them when they come home,” said Attorney General Josh Stein. “Our veterans need health care to treat serious, life-threatening medical conditions caused by the toxic chemicals they were exposed to during their service. This should be a simple vote to protect veterans. I urge Senators Tillis and Burr to do the right thing.”

For decades, the Department of Defense (DOD) used open-air burn pits to dispose of garbage, paint, plastics, jet fuel and human waste generated on military bases overseas. When these contaminants burned, they released an array of pollutants into the air including known carcinogens and particulate matter. Active burn pits existed as recently as the military conflicts in Iraq and Afghanistan. While the DOD has now closed most burn pits, veterans continue to become ill years after exposure. Burn pit exposure is linked to medical conditions including a host of cancers affecting the head, neck, kidneys, brain, and pancreas. Exposure has also resulted in veterans being diagnosed with emphysema and asthma after service.

In a letter to Senators Chuck Schumer and Mitch McConnell, Attorney General Stein and eight other attorneys general ask the Senate to pass the legislation and expand health care eligibility to post-Sept. 11 combat veterans, including more than 3.5 million veterans exposed to toxins. The proposal would also add 23 burn pit and toxic exposure-related conditions to the federal Department of Veterans’ Affairs list of service connection presumptions and create a framework for the establishment of future presumptions of service connection related to toxic exposure.

Attorney General Stein is joined in sending this letter by the Attorneys General of California, Delaware, Illinois, Iowa, Minnesota, Oregon, Pennsylvania, and Wisconsin.