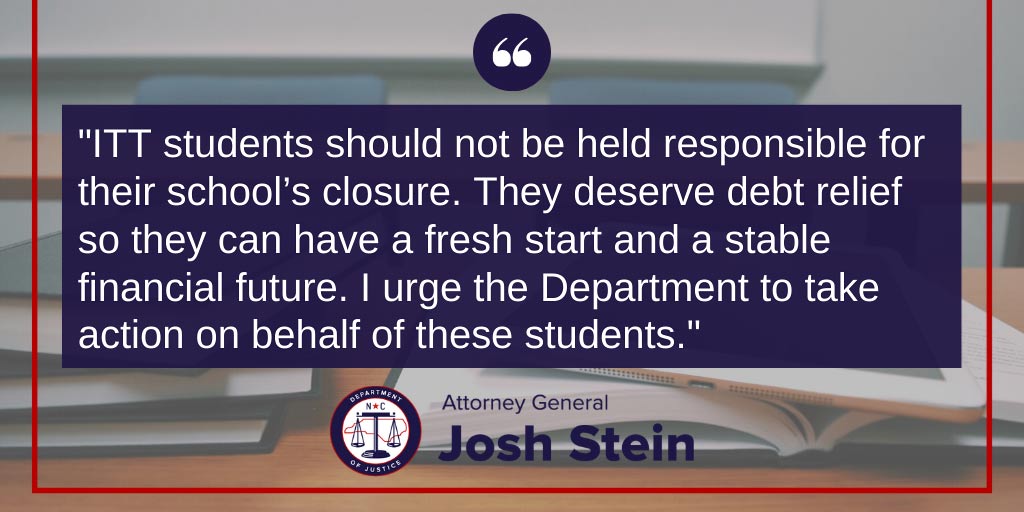 (RALEIGH) Attorney General Josh Stein called on the U.S. Department of Education to forgive federal student loans for eligible ITT students as authorized by federal regulations. An estimated 52,000 former students are eligible for nearly $833 million in closed school discharge relief, but recent information indicates that only 7,000 former students have been granted relief that amounts to less than $95 million.

“ITT students should not be held responsible for their school’s closure,” said Attorney General Josh Stein. “They deserve debt relief so they can have a fresh start and a stable financial future. I urge the Department to take action on behalf of these students.”

Attorney General Stein is part of a coalition of 22 attorneys general pressing federal regulators to clarify whether all eligible ITT students are now receiving the automatic discharges to which they are entitled. They are also asking the Department to explain how it is implementing the closed school discharge to confirm that deserving ITT students have not been excluded from the program.

Under closed school discharge, former students may be eligible for a 100 percent discharge of their federal student loans if they were unable to complete their program because their school closed. Closed school discharge is only allowed for students who were enrolled at the time the school closed, were on an approved leave of absence when the school closed, or withdrew within 120 days of the school’s closure, unless the Secretary approves a longer period. The attorneys general have asked that the window for CSD be extended given the number of problems with ITT that preceded its closure.

Attorney General Stein has also repeatedly written to U.S. Department of Education Secretary Betsy DeVos in 2018 and 2019, sending his latest letter in October of this year, to urge her to extend the CSD period for students enrolled in Dream Center Education Holdings schools so they would be eligible for loan relief. Secretary DeVos announced last week that she granted an extension for some of those students that Attorney General Stein and other attorneys general were requesting extensions for.