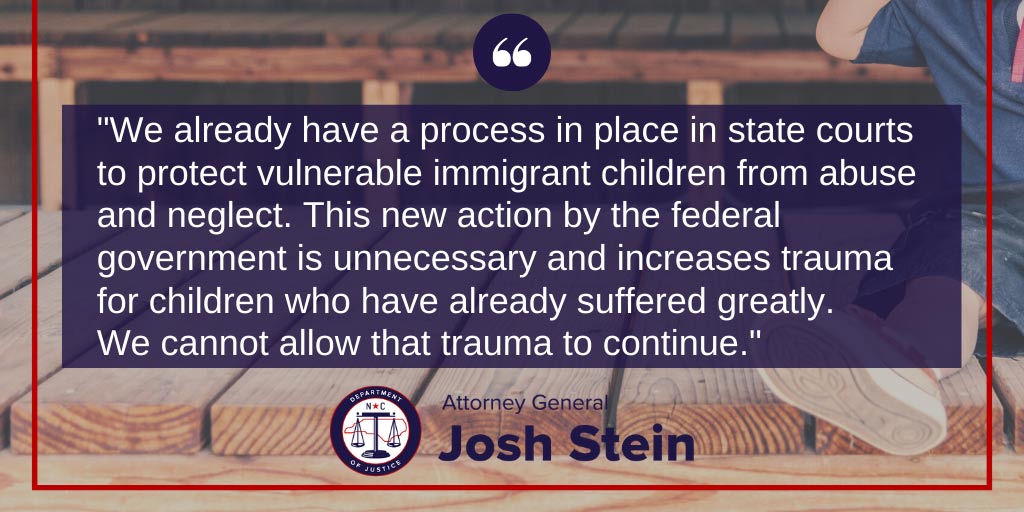 “We already have a process in place in state courts to protect vulnerable immigrant children from abuse and neglect,” said Attorney General Josh Stein. “This new action by the federal government is unnecessary and increases trauma for children who have already suffered greatly. We cannot allow that trauma to continue.”

In a comment letter to the U.S. Citizenship and Immigration Services (USCIS), the coalition of 17 attorneys general calls on the Trump administration to overhaul this proposed rule, which risks inflicting additional trauma on thousands of already vulnerable children. In the 2018 fiscal year alone, there were 21,917 SIJ applications nationwide. From October 2013 to September 2019, adult sponsors in North Carolina welcomed 8,308 unaccompanied children, many of whom are eligible for SIJ.

Under the existing process, state juvenile courts have the authority to issue predicate orders to enable a child to be eligible for SIJ if they are unable to reunify with a parent because of abuse, neglect, or abandonment as outlined under state law. Once a predicate order has been issued, the child can apply for SIJ and USCIS has 180 days to make a decision on the application.

The proposed rule creates new layers of red tape that duplicate many existing state functions, but also increase the burden on children. The federal government is now asking for the submission of additional evidence to USCIS that reunification is not viable under state law, despite the fact that a state court would have already made that determination in a court order. By adding this requirement and others, USCIS undermines the deference and credit owed to state court decisions. Furthermore, it is unclear how USCIS’ personnel would be equipped to interpret and make decisions on the multitude of laws across 50 states, as well as the laws of tribal organizations or territories under the administrative control of the U.S. government. In the comment letter, the coalition notes that it is not USCIS’ role to second-guess or re-adjudicate determinations already lawfully made by state courts.