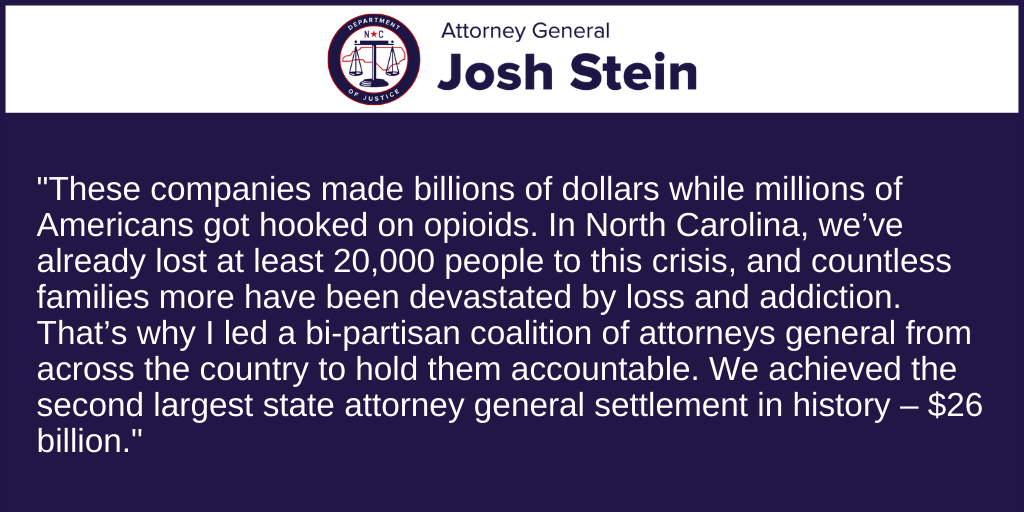 North Carolina to Receive $750 Million to Fight the Opioid Crisis

(RALEIGH) Attorney General Josh Stein announced today the final approval of the $26 billion opioid agreement with the nation’s three major pharmaceutical distributors – Cardinal, McKesson, and AmerisourceBergen – and Johnson & Johnson. Following successful state sign-on and subdivision sign-on periods, the defendants have committed to the deal and will start releasing funds to a national administrator on April 2, 2022. Money will start flowing to state and local governments in the second quarter of 2022.

“These companies made billions of dollars while millions of Americans got hooked on opioids. In North Carolina, we’ve already lost at least 20,000 people to this crisis, and countless families more have been devastated by loss and addiction. That’s why I led a bi-partisan coalition of attorneys general from across the country to hold them accountable. We achieved the second largest state attorney general settlement in history – $26 billion.

“As a result, North Carolina communities will begin to receive money this year to help people struggling with substance misuse. The treatment, recovery, prevention, and harm reduction services that will be available across the state will help people regain control over their lives and make North Carolina safer. I’m grateful to the counties and cities that have joined us in the years-long work to bring this money home to North Carolina. I pray that these funds will help us take a giant leap forward towards a better future for all North Carolinians.”

The agreement marks the culmination of three years of negotiations to resolve more than 4,000 claims of state and local governments across the country. It is the second largest multistate agreement in U.S. history, only exceeded by the Tobacco Master Settlement Agreement. State negotiations were led by Attorneys General Stein and Herbert Slatery (TN) and the attorneys general from California, Colorado, Connecticut, Delaware, Florida, Georgia, Louisiana, Massachusetts, New York, Ohio, Pennsylvania, and Texas.

Fifty-two states and territories have signed on to the agreement as well as thousands of local governments across the country. In North Carolina, all 100 counties as well as 47 municipalities have signed on the agreement. As a result, North Carolina will receive its full share of $750 million. Eighty-five percent of these funds will go directly to North Carolina’s local communities to support treatment, recovery, harm reduction, and other strategies to address the opioid epidemic. The balance will go to the state for the same purposes.

“On behalf of North Carolina’s county leaders who are working tirelessly each day to help their communities recover from the effects of the opioid crisis, the NCACC and all 100 counties are committed to directing these funds to efforts that will repair the damage caused by this epidemic with diligent and actionable stewardship,” said Kevin Leonard, Executive Director of the North Carolina Association of County Commissioners.

“The finalization of this settlement and the resources that will result from it are crucial in addressing the damage done by the opioid crisis. Opioid addiction has negatively affected individuals, families and communities, and the work by Attorney General Stein, his staff and attorneys general nationwide to secure these resources will help communities across North Carolina see better outcomes for residents, as well as for the first responders and health care workers who have been on the front lines dealing with many of the consequences,” said Rose Vaughn Williams, Executive Director of the N.C. League of Municipalities. “By supporting treatment and recovery, these dollars will assist individuals and families struggling with addiction, as well as make our communities safer.”

In addition to the funds, Cardinal, McKesson, and AmerisourceBergen will:

Johnson & Johnson is required to:

Additional information about the opioid settlements is available at https://www.morepowerfulnc.org/opioid-settlements/.