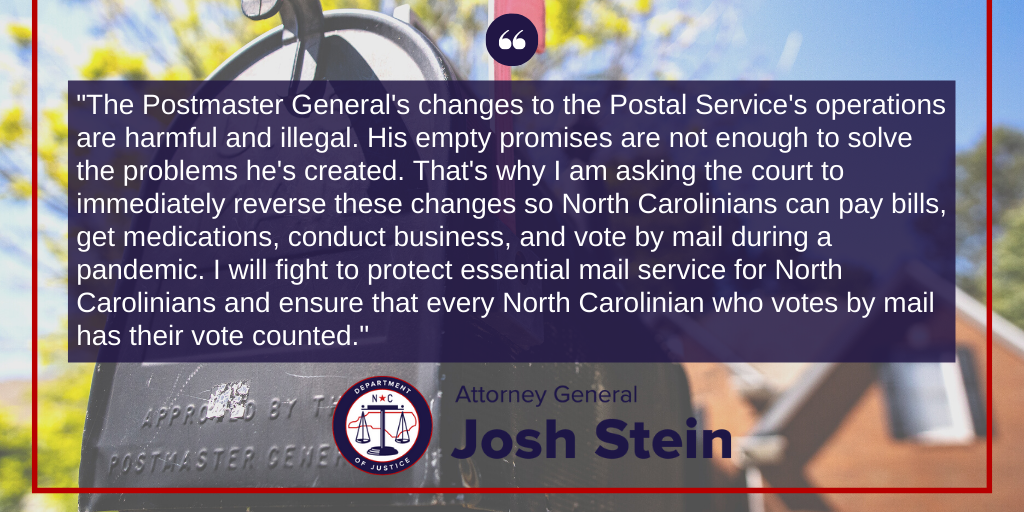 “The Postmaster General’s changes to the Postal Service’s operations are harmful and illegal,” said Attorney General Josh Stein. “His empty promises are not enough to solve the problems he’s created. That’s why I am asking the court to immediately reverse these changes so North Carolinians can pay bills, get medications, conduct business, and vote by mail during a pandemic. I will fight to protect essential mail service for North Carolinians and ensure that every North Carolinian who votes by mail has their vote counted.”

Attorney General Stein’s motion for preliminary injunction is part of a lawsuit he filed against the Postal Service and Postmaster General Louis DeJoy on August 21. Beginning in July, the Postal Service implemented a series of changes to longstanding operations. These changes, which include prohibiting “late” and “extra” trips by mail trucks and restricting when mail carriers must start and end their shifts, have led to significant mail delays and harmed veterans, seniors, and rural communities.

Attorney General Stein and six other attorneys general argue that the Postmaster General failed to follow a legally mandated process to submit proposed changes to the Postal Regulatory Commission before they take effect. The process is designed to specifically prevent the mail delivery issues caused by the Postmaster General’s changes. Since the process wasn’t followed, the attorneys general contend that the changes are unlawful and should be stopped until further review.

The Postal Service is a vital service for communities throughout North Carolina. It serves as a lifeline for small, women-owned, and minority-owned businesses, rural North Carolinians, and veterans and senior citizens who receive most of their medications via the mail. Attorney General Stein has heard from North Carolinians across the state who have experienced mail delays in receiving needed prescriptions, necessary documents, and other essential mail.

Attorney General Josh Stein is joined in filing this motion by the Attorneys General of California, Delaware, the District of Columbia, Massachusetts, Maine, and Pennsylvania.

A copy of the motion is available here.