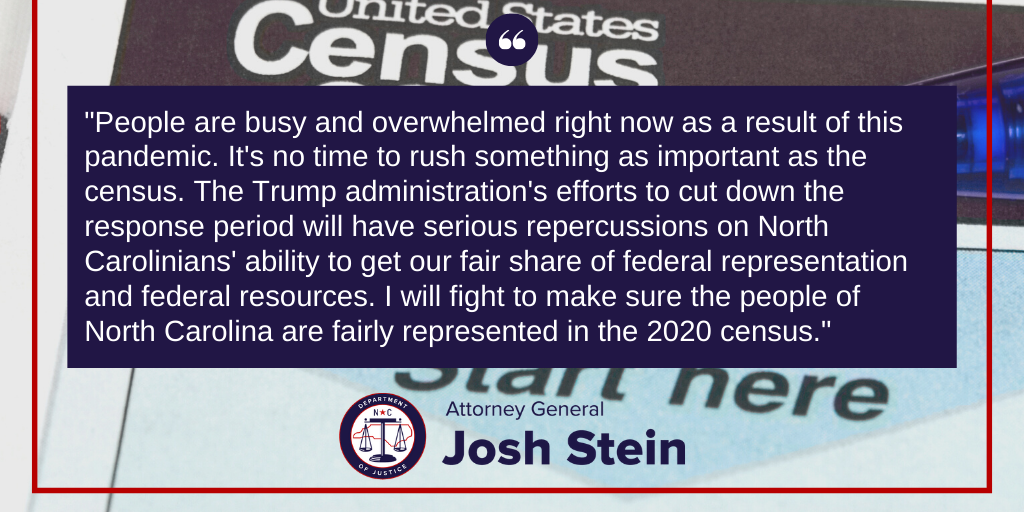 (RALEIGH) Attorney General Josh Stein filed an amicus brief supporting the National Urban League’s lawsuit challenging the Trump administration’s move to reduce the time available for people to respond to the 2020 census. Earlier this month, the U.S. Census Bureau announced that it was reducing by an entire month (from Oct. 31 to Sept. 30) the time in which self-response questionnaires will be accepted and door-to-door follow-ups by census enumerators will take place.

“People are busy and overwhelmed right now as a result of this pandemic,” said Attorney General Josh Stein. “It’s no time to rush something as important as the census. The Trump administration’s efforts to cut down the response period will have serious repercussions on North Carolinians’ ability to get our fair share of federal representation and federal resources. I will fight to make sure the people of North Carolina are fairly represented in the 2020 census.”

In their brief, filed in the U.S. District Court for the Northern District of California, the coalition of 23 attorneys general, five cities, four counties, and the U.S. Conference of Mayors argue that they have a direct stake in this dispute. The results of the census determine the states’ political representation in Congress, provide critical data for states’ redistricting efforts, and affect hundreds of billions of dollars in federal funding to states and localities for the next decade. The administration’s efforts to reduce the time for both self-responses of the questionnaire sent to every household across the country, as well as non-response follow-up operations for those who don’t respond, will inevitably harm the accuracy of the population count.

The shorter time period also flies in the face of what the Census Bureau previously said itself was necessary to conduct an accurate count, as it alters the deadline that the bureau had adopted specifically to accommodate the unique difficulties posed by the coronavirus pandemic. Currently, 60.7 percent of North Carolinians have responded to the census, ranking 37th out of all states in response rate.

Attorney General Stein previously sued the Trump administration in July over its efforts to exclude undocumented immigrations from the count of people that determines the number of U.S House of Representatives members each state receives. And in 2019, the Supreme Court ruled in Attorney General Stein’s favor after he sued to block the inclusion of a citizenship question in the census.