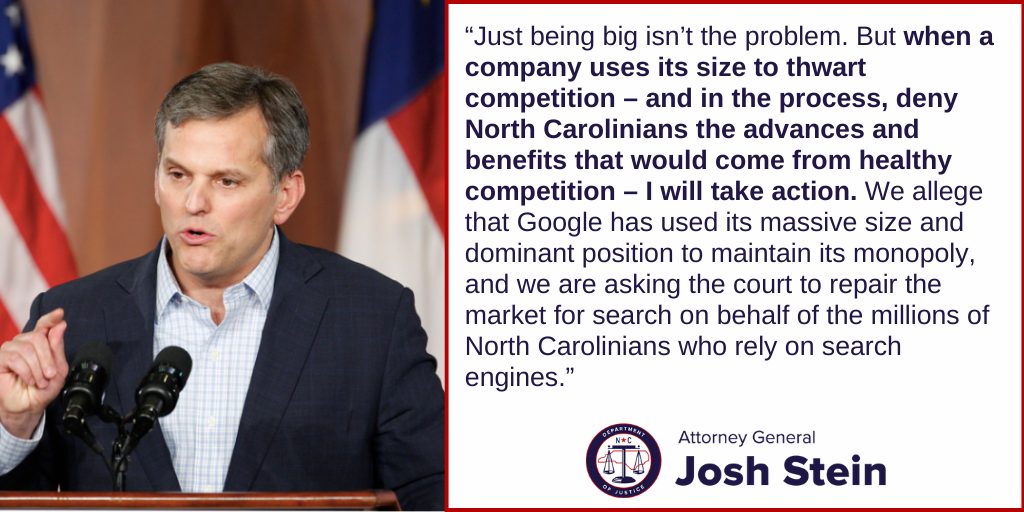 “Just being big isn’t the problem,” said Attorney General Josh Stein. “But when a company uses its size to thwart competition – and in the process, deny North Carolinians the advances and benefits that would come from healthy competition – I will take action. We allege that Google has used its massive size and dominant position to maintain its monopoly, and we are asking the court to repair the market for search on behalf of the millions of North Carolinians who rely on search engines.”

The lawsuit alleges that Google:

The lawsuit requests that the court halt Google’s illegal conduct and restore a competitive marketplace. The states also seek to unwind any advantages that Google gained as a result of its anticompetitive conduct, including divestiture of assets as appropriate. Finally, the court is asked to provide any additional relief it determines appropriate, as well as reasonable fees and costs to the states.

The complaint was filed in the U.S. District Court for the District of Columbia, in conjunction with a Motion to Consolidate seeking to combine the states’ case with the pending U.S. DOJ case. The states’ complaint is consistent with the lawsuit filed by the U.S. Department of Justice on Oct. 20, which alleged that Google improperly maintains its monopoly power in general search and search advertising through the use of exclusionary agreements.