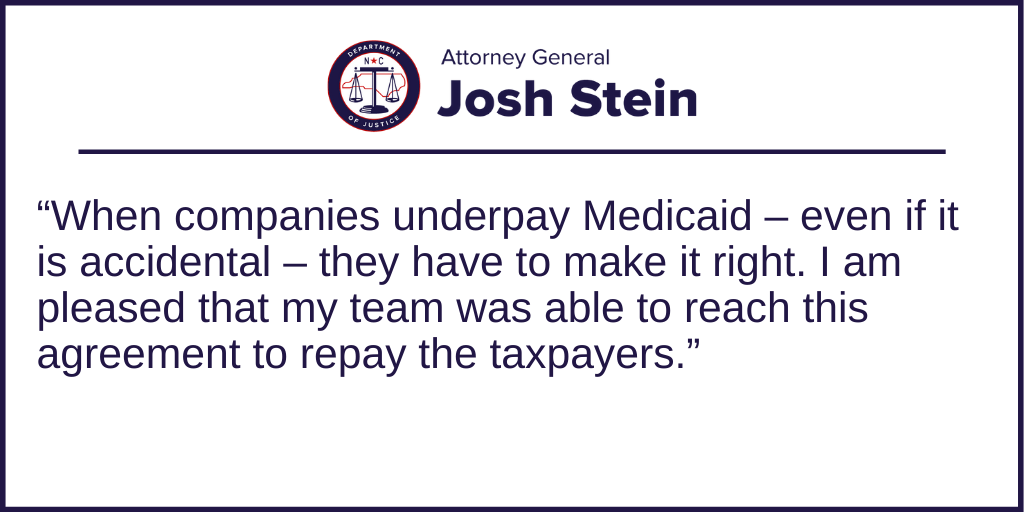 (RALEIGH) Attorney General Josh Stein today announced a $10,397,052 settlement with Royal Pharmaceuticals LLC and Seton Pharmaceuticals LLC (Royal/Seton). The settlement was reached after the two jointly-held pharmaceutical companies self-disclosed a pricing error that resulted in the underpayment of Medicaid drug rebates to the states from 2013 to 2017. North Carolina’s share of the national settlement is $720,688. That money will be restored to the Medicaid program.

“When companies underpay Medicaid – even if it is accidental – they have to make it right,” said Attorney General Josh Stein. “I am pleased that my team was able to reach this agreement to repay the taxpayers.”

In July 2018, Royal/Seton self-reported an error in the companies’ Medicaid Drug Rebate Program (MDRP) data to the North Carolina Medicaid Investigations Division (MID), which is part of the Department of Justice. As part of the MDRP, drug manufacturers are required to pay rebates to state Medicaid programs for each of the company’s drugs that are covered by Medicaid. From September 2013 to January 2017, Royal/Seton inaccurately reported the “Market Date” data element that is part of the Centers for Medicare and Medicaid Services’ (CMS) calculation of each drug’s rebate amount for two low-potency topical steroid products: Derma-Smoothe and its generic, fluocinolone. Due to the error, CMS’s rebate calculation was lower and, consequently, Royal/Seton underpaid its rebate.