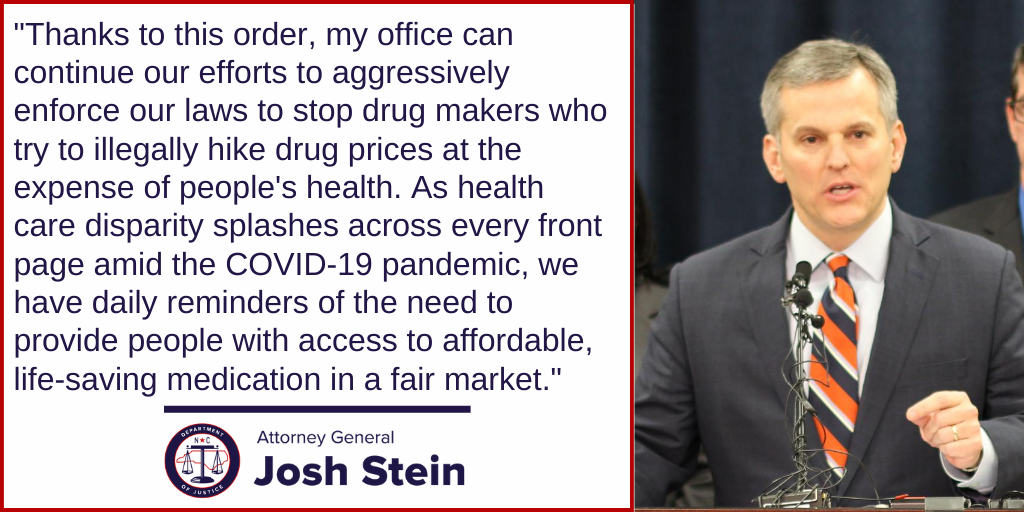 (RALEIGH) Attorney General Josh Stein today announced that the U.S. District Court Southern District of New York has rejected an attempt by Martin Shkreli (also known as Pharma Bro) and his company Vyera Pharma to dismiss the Attorney General’s lawsuit against them. The lawsuit alleges that Shkreli and his company conspired to stifle competition, drastically inflating the price of the generic drug Daraprim (pyrimethamine). Daraprim is an important treatment for toxoplasmosis, and it was cheap and accessible for decades. But in August 2015, Vyera purchased the drug, increased the price by more than 4,000 percent, altered its distribution, and conspired to stifle competition that would have led to lower prices. The Attorney General’s case will now proceed to trial.

“Thanks to this order, my office can continue our efforts to aggressively enforce our laws to stop drug makers who try to illegally hike drug prices at the expense of people’s health,” said Attorney General Josh Stein. “As health care disparity splashes across every front page amid the COVID-19 pandemic, we have daily reminders of the need to provide people with access to affordable, life-saving medication in a fair market.”

Daraprim is the only Food and Drug Administration (FDA)-approved drug for the treatment of toxoplasmosis, a parasitic disease which may pose serious and often life-threatening consequences for those with compromised immune systems, including babies born to women who have the disease and individuals with HIV. Despite being unpatented, there has never been a generic version of Daraprim sold in the United States. After Shkreli and Vyera purchased the rights to Daraprim in August 2015 and Vyera was the only FDA-approved source of the medication, they raised the price of the drug by more than 4,000 percent overnight to $750 per pill.

Attorney General Stein’s lawsuit seeks to enjoin Vyera’s conduct, as well as to obtain the return of unjust profits that would be distributed to the victims of the company’s illicit scheme. It also asks the courts to issue an order banning both Shkreli — who is already serving a seven-year sentence in federal prison for securities fraud — and his business partner Kevin Mulleady from the pharmaceutical industry for life.

Attorney General Stein is joined in this lawsuit by the FTC and the Attorneys General of New York, California, Illinois, Ohio, Pennsylvania, and Virginia.