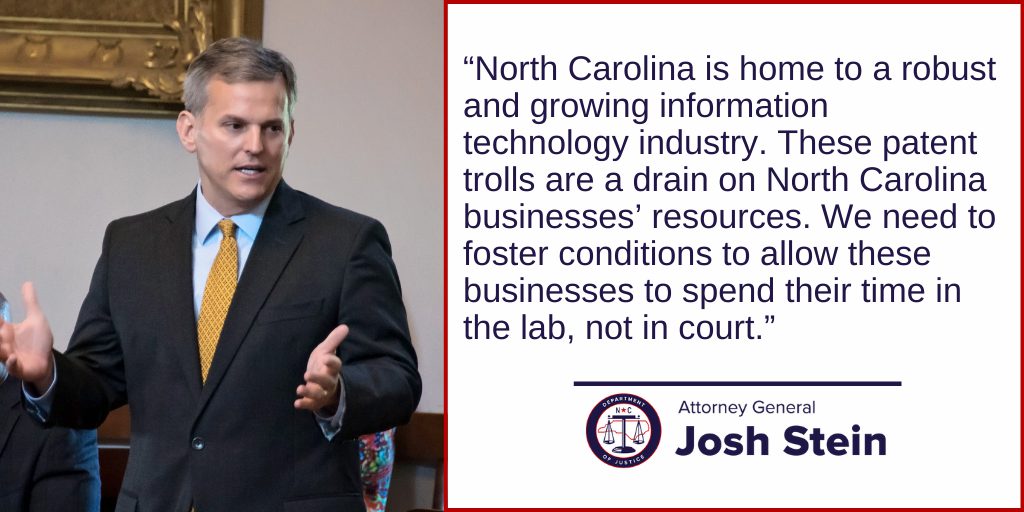 (RALEIGH) Attorney General Josh Stein today filed an amicus brief to defend a 2014 North Carolina law designed to curb abusive practices by patent trolls – i.e. businesses that exist for the primary purpose of bringing patent infringement lawsuits. Attorney General Stein argues that patent trolls stifle this innovation by forcing North Carolina companies to pay nuisance settlements or sham licensing fees against even bad-faith patent claims – money that could otherwise be spent employing people and developing ideas to move the tech industry forward. North Carolina is one of more than 30 states with a law to protect businesses from patent trolls.

“North Carolina is home to a robust and growing technology industry,” said Attorney General Josh Stein. “These patent trolls are a drain on North Carolina businesses’ resources. We need to create conditions to allow these businesses to spend their time innovating and creating, not in court.”

In the brief, Attorney General Stein argues that patent trolls, or non-practicing entities (NPEs) are a growing problem and that:

• State laws against patent trolls that are in place in 30 states are appropriate and constitutional.
• NPEs are significant contributors to increasingly expensive patent litigation.
• The burden – and expense – of NPE litigation falls disproportionally on the innovating companies, in particular small and medium companies that do not have the resources to fight back in court.
• Patent trolls buy and litigate lower-quality, older patents. As such, they often lose their cases or resolve them through settlement – again at a higher cost to the businesses responsible for innovation.
• NPE patent assertions harm innovation.
A coalition of the State’s leading technology companies and associations, including SAS and the North Carolina Technology Association, have also filed a brief describing how North Carolina companies have secured many patents to protect their intellectual property and have invested millions of dollars in research and development in their cutting-edge technologies.