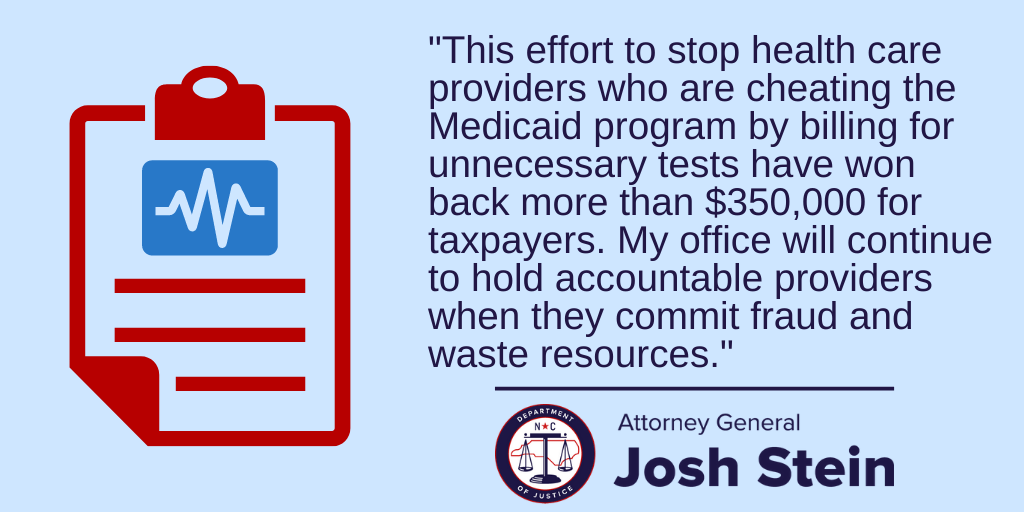 “This effort to stop health care providers who are cheating the Medicaid program by billing for unnecessary tests have won back more than $350,000 for taxpayers,” said Attorney General Josh Stein. “My office will continue to hold accountable providers when they commit fraud and waste resources.”

Between January 2016 and May 2020, the defendants allegedly submitted false or fraudulent claims for ANS testing when the testing services were not medically necessary. As a result, they were reimbursed for funds that they were not entitled to. The defendants have also entered into an integrity agreement with the Office of Inspector General for the United States Department of Health and Human Services.

The federal and North Carolina False Claims Acts authorize the governments to recover triple the money falsely obtained, plus substantial civil penalties for each false claim submitted. It should be noted that the civil claims resolved by settlement here are allegations only, and that there has been no judicial determination or admission of liability.

The investigation and prosecution of this case was conducted by the United States Attorney’s Office for the Eastern District of North Carolina and the Medicaid Investigations Division of the North Carolina Attorney General’s Office.

This is the second settlement Attorney General Stein has won as part of Operation You’ve Got Nerve – he also won $60,000 in a previous settlement.

How North Carolina Would Use Opioid Settlement Funds: Frequently Asked Questions on The Memorandum of Agreement Between State and Local Governments in North Carolina »
« Be Skeptical of Companies Selling Over-the-Counter Hearing Aids