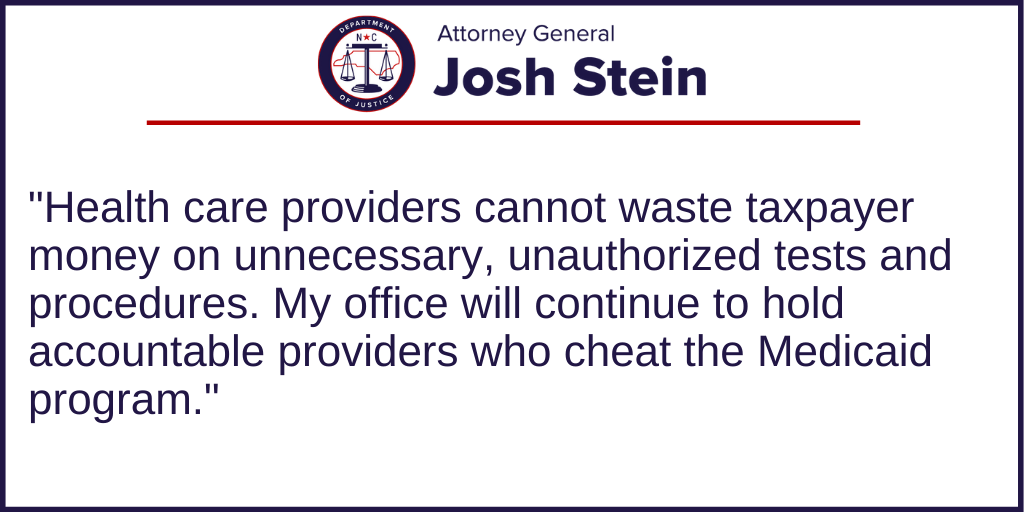 (RALEIGH) Attorney General Josh Stein today announced a settlement to resolve allegations against Kingsley Ugochukwu, M.D. and Angier Pediatric and Adult Medical Center (Angier) involving the submission of fraudulent claims to the North Carolina Medicaid program. Dr. Ugochukwu and Angier have agreed to pay back $60,000 to the program.

In his practice, Dr. Ugochukwu administered tests that weren’t medically necessary, had no supporting clinical documentation, and/or were performed in violation of Medicaid policy. Between Jan. 1, 2016, and April 30, 2020, he tested for rare autonomic nervous function disorders that should only be tested for after a clinician suspects a disorder and only once per Medicaid beneficiary. He also tested for diminished peripheral arterial pulses through peripheral vascular tests.

This investigation and settlement stemmed from the Medicaid Investigations Division’s continuing data mining efforts on Medicaid providers who are engaged in aberrant billing practices involving a wide variety of specialties, including, but not limited to, dental practitioners, internal and family medicine, and OB/GYN providers. The settlement was obtained by the Medicaid Investigations Division and the North Carolina Department of Health and Human Services, Division of Medical Assistance – Clinical Policy and Program Integrity.