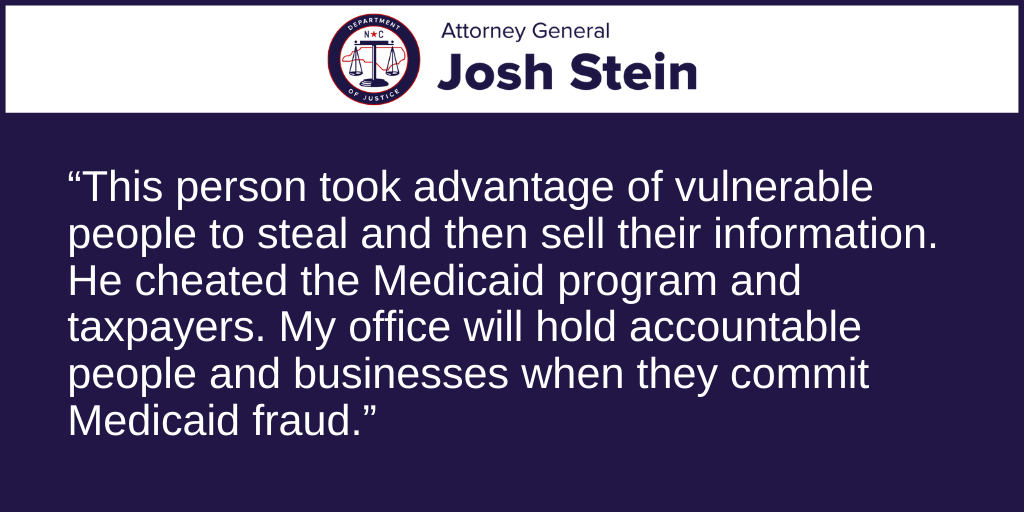 (RALEIGH) Attorney General Josh Stein announced that Ruben Samuel Matos of Angier was sentenced to 42 months in prison and three years of supervised release for conspiracy to commit health care fraud. He was also ordered to pay $1,997,883 in restitution to the North Carolina Fund for Medical Assistance.

“This person took advantage of vulnerable people to steal and then sell their information,” said Attorney General Josh Stein. “He cheated the Medicaid program and taxpayers. My office will hold accountable people and businesses when they commit Medicaid fraud.”

Between 2014 and 2017, Matos conspired with multiple people and businesses to defraud the North Carolina Medicaid system by submitting more than $3.6 million in false and fraudulent claims for the reimbursement of behavioral health services. Matos partnered with Raleigh resident Reginald Van Reese, Jr. to canvass low-income neighborhoods to identify people who were eligible for Medicaid and collect their personal information and Medicaid identification numbers. They then sold that information to behavioral health companies so the companies could generate fraudulent claims for reimbursement of services that were never provided.

Reese was previously convicted of conspiracy in a related case. Fozard and Lozada have both pleaded guilty to health care fraud charges and are awaiting sentencing.

The investigation and prosecution of this case was conducted by the Medicaid Investigations Division, the U.S. Attorney’s Office for the Eastern District of North Carolina, and the Federal Bureau of Investigation.