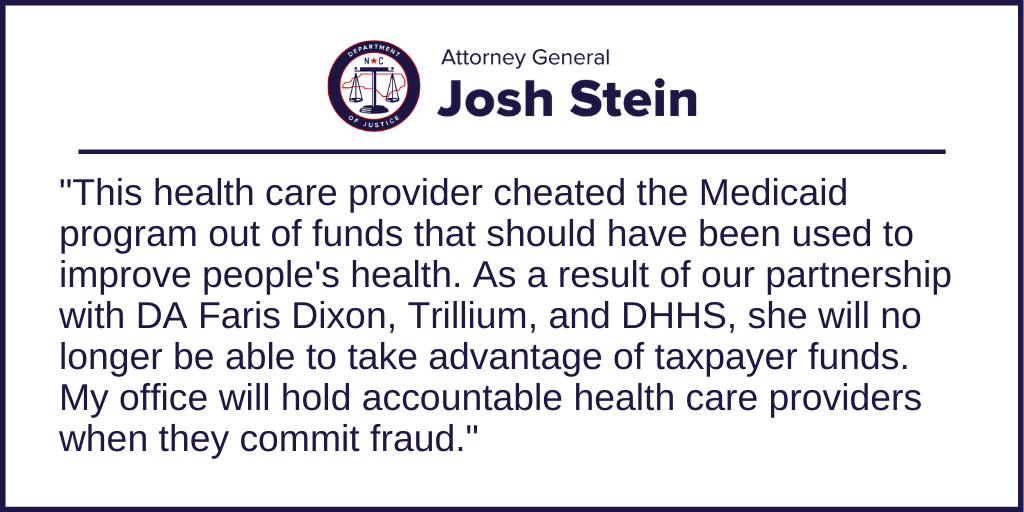 (RALEIGH) Attorney General Josh Stein announced that Sheila Faye Leggette pleaded guilty to six counts of obtaining property by false pretenses. She was sentenced to 8-19 months in prison followed by 36 months of supervised probation and ordered to pay $27,033.28 in restitution by Judge Jeffrey B. Foster on Monday. Leggette is also barred from engaging as a health care provider in a government health care benefit program moving forward.

“This health care provider cheated the Medicaid program out of funds that should have been used to improve people’s health,” said Attorney General Josh Stein. “As a result of our partnership with DA Faris Dixon, Trillium, and DHHS, she will no longer be able to take advantage of taxpayer funds. My office will hold accountable health care providers when they commit fraud.”

Leggette was the owner and operator of Nu Look on Life, LLC located in Greenville. From January 2014 to September 2016, Leggette submitted fraudulent billing claims for outpatient behavioral health services to Trillium Health Resources, a Medicaid Managed Care Organization-Local Management Entity, and the North Carolina Division of Health Benefits (Medicaid). She indicated that she provided services to six people who are Medicaid beneficiaries when, in fact, these services were never provided. These fraudulent claims resulted in a loss of $27,033.28 – the restitution Leggette was ordered to pay today will be used to provide medical services as originally intended.

The case originated from a referral from the North Carolina Division of Health Benefits in NCDHHS and Trillium. This conviction was obtained in collaboration between the Attorney General’s Medicaid Investigations Division and the Honorable Faris C. Dixon, Jr., District Attorney for Prosecutorial District 3.