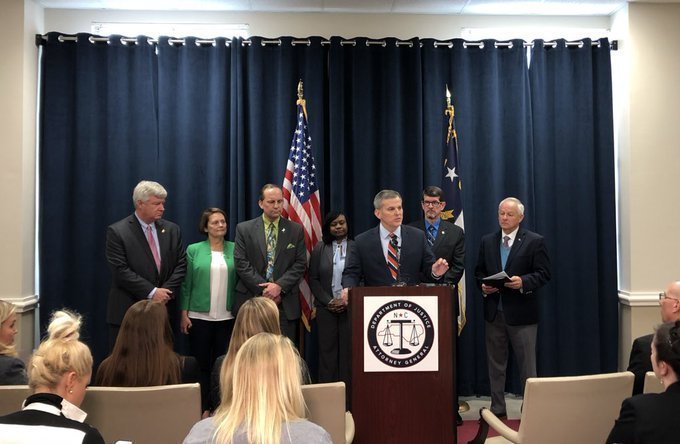 (RALEIGH) Attorney General Josh Stein, joined by bill sponsors Sen. Warren Daniel and Reps. Jamie Boles, Carson Smith, Mary Belk, and Billy Richardson today unveiled a new legislative proposal, the Standing Up for Rape Victims Act, or Survivor Act, which mandates submitting sexual assault kits for testing to an accredited lab for local law enforcement agencies. Doing so will deliver justice to more victims and prevent backlogs from occurring in the future. The legislation also provides $6 million in funding over the next two years to address the current backlog of sexual assault kits in local law enforcement custody across the state.

“The untested sexual assault kits sitting on law enforcement shelves are one of this state’s biggest threats to public safety,” said Attorney General Josh Stein. “This legislation, along with the $4 million grant funding my office has secured, will allow us to move forward on testing some of the more than 15,000 sexual assault kits currently in local law enforcement custody. But this legislation is also forward looking – to prevent such a backlog from occurring again, it requires law enforcement agencies to submit these kits for testing on a going forward basis within 45 days of the kit’s collection. The Survivor Act will go a long way in making North Carolina safer from serial rapists and bringing justice to survivors of these heinous crimes.”

The legislation also provides funding for the State Crime Lab to hire new forensic scientists. Doing so will ensure that there are enough scientists on staff to address new kits that are submitted for testing in the coming weeks and months.

“We are here today with the Attorney General to introduce proposed bipartisan legislation to ensure that every sexual assault evidence collection kit reported to law enforcement in NC is tested,” said Rep. Jamie Boles. “This proposed legislation also sets up a process for testing the inventory of untested sexual assault evidence collection kits currently in storage throughout the state.”

“Time is of the essence in testing these kits, because each investigative and CODIS hit lead has the potential to remove a dangerous offender from the streets,” said Rep. Carson Smith. “Testing these kits sends a powerful message to offenders that we are serious about sexual assault and using the evidence they left behind to apprehend and prosecute them. It also sends the message to survivors that they and their cases matter.”

For more information on the Survivor Act, please click here for a fact sheet on this issue.

Background on Attorney General Josh Stein and this issue: