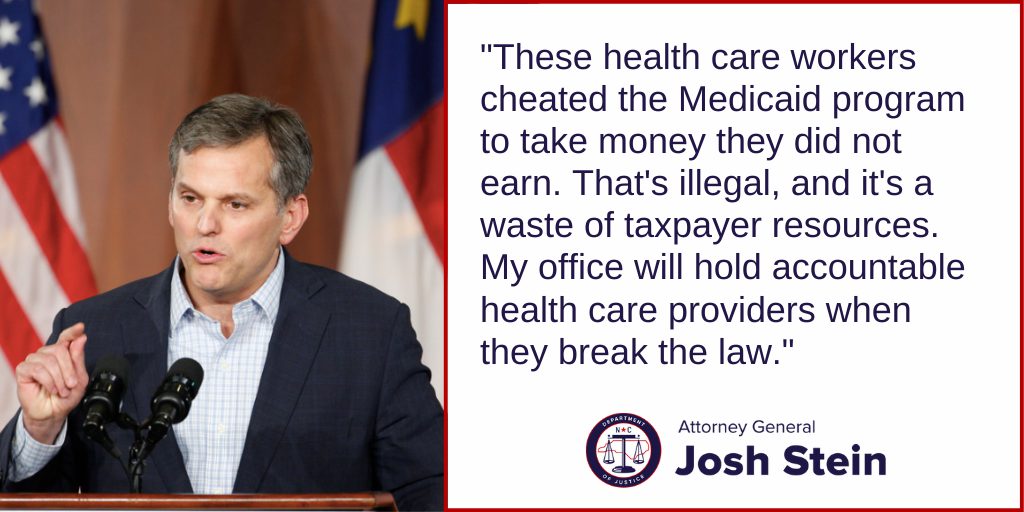 (RALEIGH) Attorney General Josh Stein today announced that James Aaron Lawson and Tanisha Latoy Darden each pleaded guilty to attempted medical assistance provider fraud. They were sentenced to 45 days in prison, with their prison sentences suspended in lieu of 18 months of supervised probation. Lawson was ordered to pay $1,020 and Darden was ordered to pay $855 in restitution to A Caring Heart, a Medicaid provider in Clinton.

“These health care workers cheated the Medicaid program to take money they did not earn,” said Attorney General Josh Stein. “That’s illegal, and it’s a waste of taxpayer resources. My office will hold accountable health care providers when they break the law.”

Lawson and Darden were rehabilitation technicians at A Caring Heart. From April to May 2020, they submitted false timesheets claiming to have provided services to a Medicaid recipient, when in fact they were not working those hours. They were then paid for time they did not work. A Caring Heart submitted reimbursement claims for this time to Eastpointe, a Medicaid Managed Care Organization-Local Management Entity, and was reimbursed. A Caring Heart has since reimbursed Eastpointe for these false claims, and Darden and Lawson were ordered today to reimburse A Caring Heart.