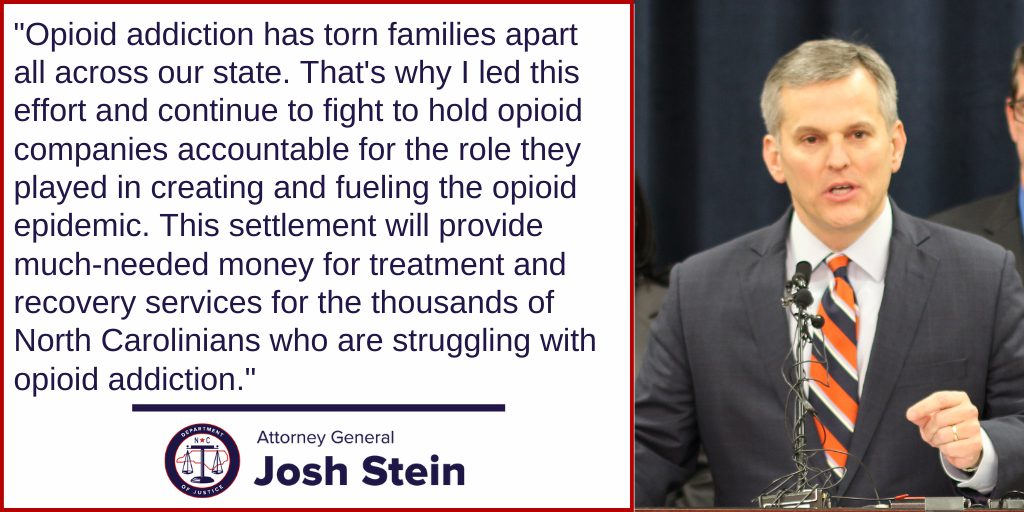 (RALEIGH) Attorney General Josh Stein today announced an update to a global settlement framework agreement between 50 attorneys general, local subdivisions, and the opioid manufacturer Mallinckrodt (MNK), its subsidiaries, and certain other affiliates. Attorney General Stein was a lead negotiator in achieving this settlement. Under the new settlement, MNK will pay $1.6 billion into a trust as described below. MNK is currently the largest generic opioid manufacturer in the United States.

“Opioid addiction has torn families apart all across our state,” said Attorney General Josh Stein. “That’s why I led this effort and continue to fight to hold opioid companies accountable for the role they played in creating and fueling the opioid epidemic. This settlement will provide much-needed money for treatment and recovery services for the thousands of North Carolinians who are struggling with opioid addiction.”

MNK also agrees that its opioid business will be subject to stringent injunctive relief that, among other things, will prevent marketing and ensure systems are in place to prevent drug misuse.

This payment schedule improves the February deal by moving $150 million from the last payment to the first. Since the February settlement, MNK has taken on additional liability due to other legal issues and the impact of COVID-19. As a result, MNK is now putting the entire company into bankruptcy, which requires that the February agreement be renegotiated.

Details about how much each state will receive, how the money will be distributed, and how the trust will be administered are all still being negotiated.