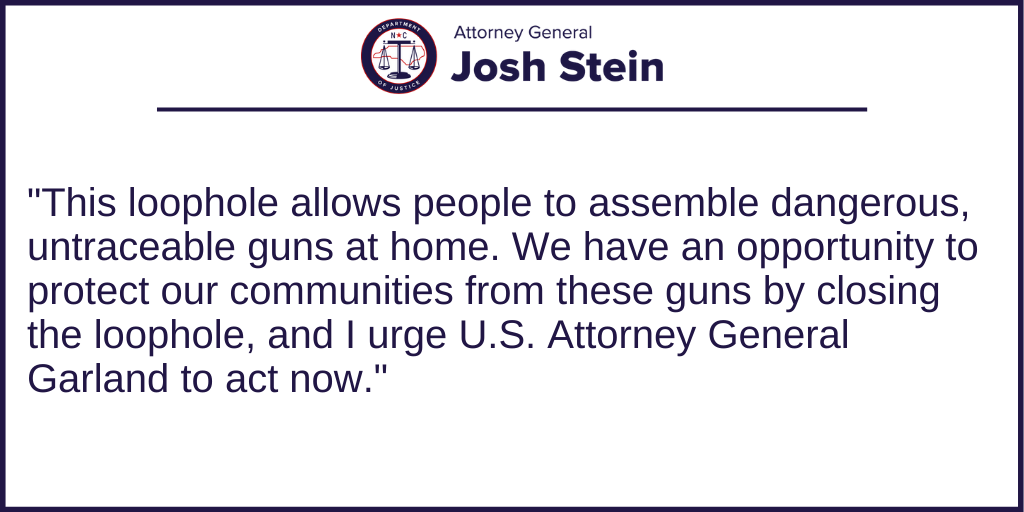 (RALEIGH) Attorney General Josh Stein today called on U.S. Attorney General Merrick Garland to close a loophole in the Bureau of Alcohol, Tobacco, Firearms and Explosives’ (ATF) interpretation of the federal Gun Control Act. The loophole allows people who were convicted of crimes, domestic abusers, and others who are prohibited from purchasing firearms to evade common-sense gun laws and purchase guns that are nearly fully assembled, which can be easily put together into unserialized and untraceable ghost guns.

“This loophole allows people to assemble dangerous, untraceable guns at home,” said Attorney General Josh Stein. “We have an opportunity to protect our communities from these guns by closing the loophole, and I urge U.S. Attorney General Garland to act now.”

Ghost guns typically start as “80 percent receivers” that are often sold in kits without background checks. Currently, ATF’s incorrect interpretation allows 80 percent receiver kits to be sold online and at gun shows throughout the country without background checks. They are also not required to use serial numbers, making them untraceable by law enforcement after being assembled.

The attorneys general are calling on U.S. Attorney General Garland to issue a new interpretation of the Gun Control Act that will include 80 percent receivers in the category of firearms that require background checks.