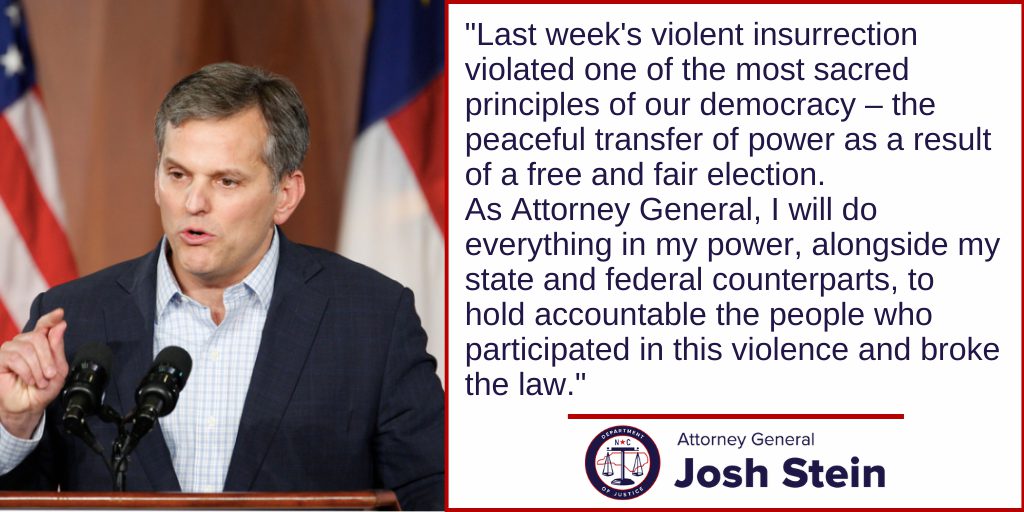 (RALEIGH) Attorney General Josh Stein today joined a bipartisan coalition of 50 attorneys general in condemning the Jan. 6 attack on the U.S. Capitol and asserting that such actions cannot be allowed to go unchecked.

“Last week’s violent insurrection violated one of the most sacred principles of our democracy – the peaceful transfer of power as a result of a free and fair election,” said Attorney General Josh Stein. “As Attorney General, I will do everything in my power, alongside my state and federal counterparts, to hold accountable the people who participated in this violence and broke the law.”

“We, the undersigned state attorneys general, are committed to the protection of public safety, the rule of law, and the U.S. Constitution. We are appalled that on January 6, 2021, rioters invaded the U.S. Capitol, defaced the building, and engaged in a range of criminal conduct—including unlawful entry, theft, destruction of U.S. government property, and assault. Worst of all, the riot resulted in the deaths of individuals, including a U.S. Capitol Police officer, and others were physically injured. Beyond these harms, the rioters’ actions temporarily paused government business of the most sacred sort in our system—certifying the result of a presidential election.

We all just witnessed a very dark day in America. The events of January 6 represent a direct, physical challenge to the rule of law and our democratic republic itself. Together, we will continue to do our part to repair the damage done to institutions and build a more perfect union. As Americans, and those charged with enforcing the law, we must come together to condemn lawless violence, making clear that such actions will not be allowed to go unchecked.

Thank you for your consideration of and work on this crucial priority.”

Anyone with information about the Jan. 6 attacks should submit information to the FBI via https://FBI.gov/USCapitol or 1-800-CALLFBI (225-5324).