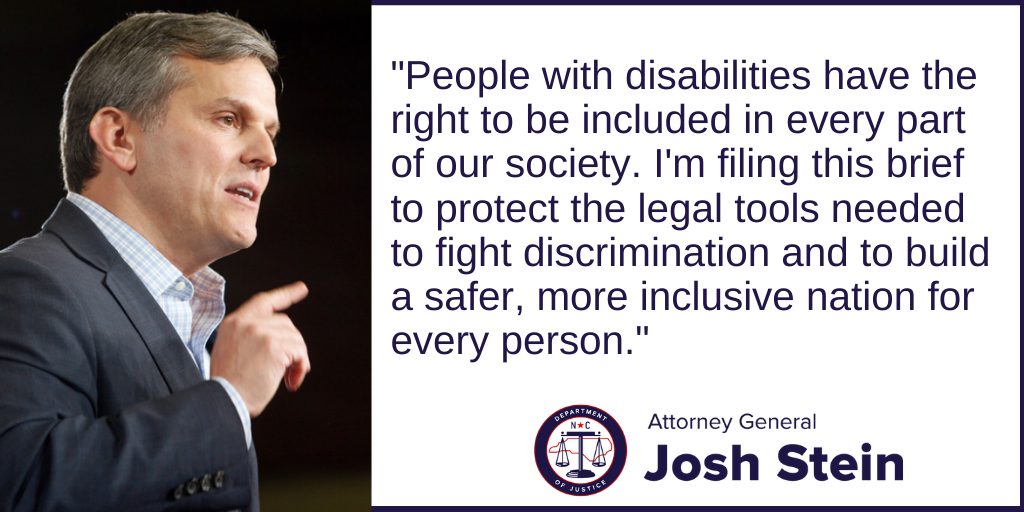 “People with disabilities have the right to be included in every part of our society,” said Attorney General Josh Stein. “I’m filing this brief to protect the legal tools needed to fight discrimination and to build a safer, more inclusive nation for every person.”

Attorney General Stein and a coalition of 18 attorneys general today filed a friend-of-the-court brief in CVS Pharmacy v. Doe, a case concerning whether a health plan is discriminating against HIV-positive people by limiting where they can obtain medication for in-network prices. While the attorneys general do not take a position on the precise outcome of this case or support either party, they urge the Supreme Court to preserve the existing standard for challenges to public programs that have the effect of discriminating against people with disabilities, even if there was no intent to disadvantage these people.

The Rehabilitation Act of 1973 was passed to help people with disabilities integrate into American life. Section 504 of the law prohibits discrimination based on disability in programs or activities receiving federal funds and authorizes legal challenges to discriminatory policies. In an earlier Supreme Court decision, the court explained that under Section 504, people with disabilities must have “meaningful access” to a particular government benefit or program. Over the past 35 years, this standard has become a key part of American law and has enabled challenges to policies that have a discriminatory effect on individuals with disabilities, even when the programs are not intentionally discriminatory.