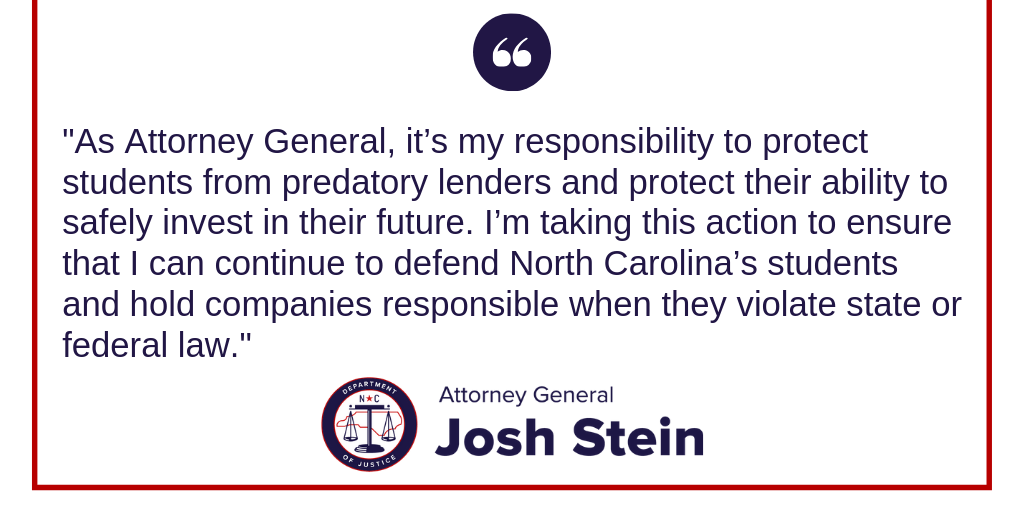 (RALEIGH) Attorney General Josh Stein today filed an amicus brief defending the states’ ability to enforce state and federal consumer protection laws against student loan services. Attorney General Stein joined a coalition of 32 attorneys general to file the brief in the United States Court of Appeals for the Third Circuit, arguing that the case brought by the Commonwealth of Pennsylvania against student loan servicer Navient for exploiting student loan borrowers should be permitted to go forward in the federal courts.

“As Attorney General, it’s my responsibility to protect students from predatory lenders and protect their ability to safely invest in their future,” said Attorney General Josh Stein. “I’m taking this action to ensure that I can continue to defend North Carolina’s students and hold companies responsible when they violate state or federal law.”

While more than 92 percent of the $1.5 trillion in outstanding student loan debt is owned or guaranteed by the federal government, the day-to-day management of student loans is administered by a variety of private student loan servicing companies that are responsible for collecting payments, enrolling borrowers in specific repayment plans, facilitating the loan’s payoff, collecting on delinquent loans, and otherwise assisting borrowers as issues arise over the lifetime of a loan. And state laws ensure that student loan servicers — like any other business – operate honestly in dealing with consumers.

In 2017, Pennsylvania sued Navient, one of the nation’s largest student loan servicers, for engaging in various unfair and deceptive business practices in servicing student loans that violated the state’s unfair and deceptive business practices statute and the federal Consumer Financial Protection Act. Navient moved to dismiss Pennsylvania’s lawsuit by arguing that the federal Higher Education Act preempted Pennsylvania’s state-law claims, and that Pennsylvania could not bring claims under the federal CFPA because the Consumer Financial Protection Bureau (CFPB) had already sued Navient. After the district court denied the motion, Navient appealed to the United States Court of Appeals for the Third Circuit.

The coalition of attorneys general are arguing in their brief that states have a substantial interest in protecting their residents from all unfair and deceptive business practices committed by businesses operating within their borders, including federal student loan servicers. Additionally, consumer protection is an area traditionally enforced by states and the federal government has welcomed the states’ role in this area. The coalition also contends that the CFPA does not limit the states’ authority to bring federal claims in cases where the CFPB has already sued.

A copy of the brief is here.