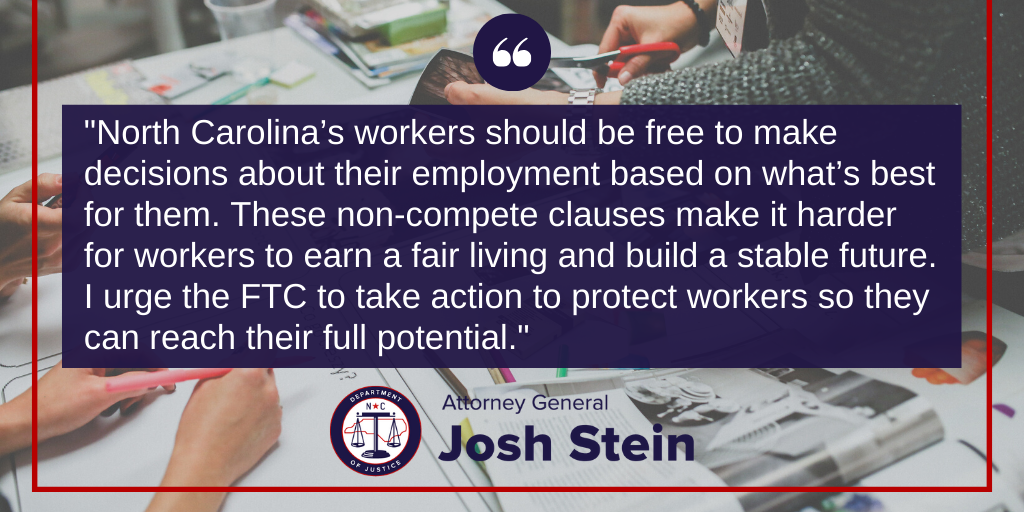 “North Carolina’s workers should be free to make decisions about their employment based on what’s best for them,” said Attorney General Josh Stein. “These non-compete clauses make it harder for workers to earn a fair living and build a stable future. I urge the FTC to take action to protect workers so they can reach their full potential.”

One in every five workers, which totals 30 million Americans, are currently restricted by non-compete clauses. Non-compete clauses in employment contracts prevent workers in many industries from moving from one business to another, getting better jobs, starting their own business, and leaving hostile or unsafe work environments. Employers use these clauses despite the fact that they can protect their interests in other ways that are less harmful to their employees and to other businesses, such as using intellectual property law, nondisclosure agreements, or simply by making their workplace an environment where workers want to continue working.

The attorneys general ask the FTC to use its rulemaking authority to limit the use of non-compete clauses because the FTC is in the best position to curb the practice nationwide and to make sure that every worker and business throughout the country is protected from abusive non-compete clauses. A rulemaking preventing the use of such clauses will curb a pervasive, noncompetitive practice and encourage all employers to retain workers by creating a better place to work — not by threatening the worker or their new employer with a lawsuit.