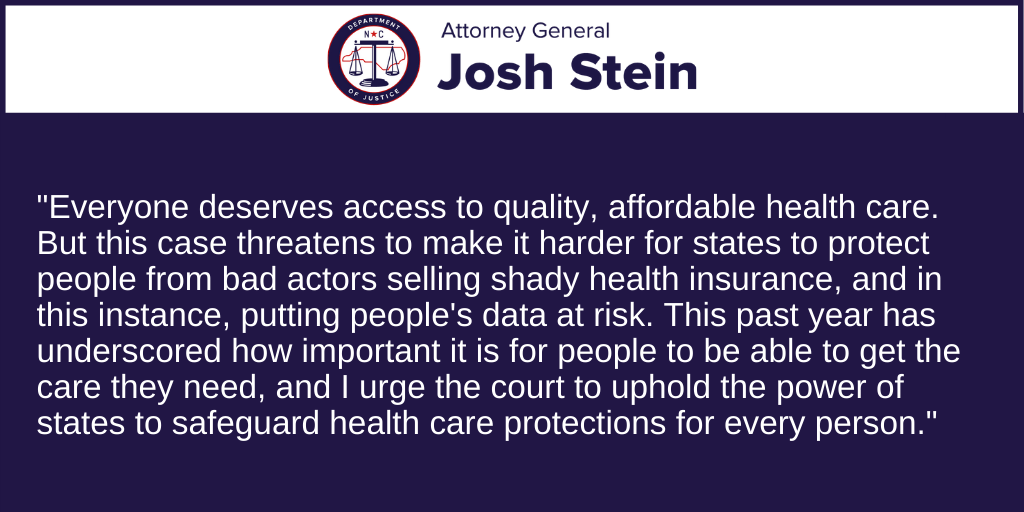 “Everyone deserves access to quality, affordable health care,” said Attorney General Josh Stein. “But this case threatens to make it harder for states to protect people from bad actors selling shady health insurance, and in this instance, putting people’s data at risk. This past year has underscored how important it is for people to be able to get the care they need, and I urge the court to uphold the power of states to safeguard health care protections for every person.”

Attorney General Stein and 21 other attorneys general filed an amicus brief in U.S. Department of Labor v. Data Marketing Partnership. The case focuses on whether certain health plans fall outside of state insurance regulations because they are considered federal Employee Retirement Income Security Act (ERISA) plans. The plaintiff, Data Marketing Partnership, runs a “partnership” that provides health insurance to thousands of “limited partners.” In exchange, all electronic data generated by these limited partners as they use their personal devices and surf the internet can be collected and sold to another entity.

The U.S. Department of Labor (DOL) determined that the plan failed to qualify under ERISA’s provisions, but a federal judge in Texas invalidated that decision and ordered DOL to treat the plan as a valid scheme.

The attorneys general argue that treating this scheme as an employee benefit plan under ERISA encroaches on states’ historic authority to regulate insurance and protect consumers, upsets the guardrails the Supreme Court and Congress have placed on ERISA’s scope, and disregards the actual nature of the relationship between Data Marketing Partnership and its limited partners, which has none of the hallmarks of an employer-employee relationship. Further, the attorneys general contend that if the court allows this scheme to be considered an employee benefit plan, unscrupulous insurance providers will use these tactics to avoid state regulation.