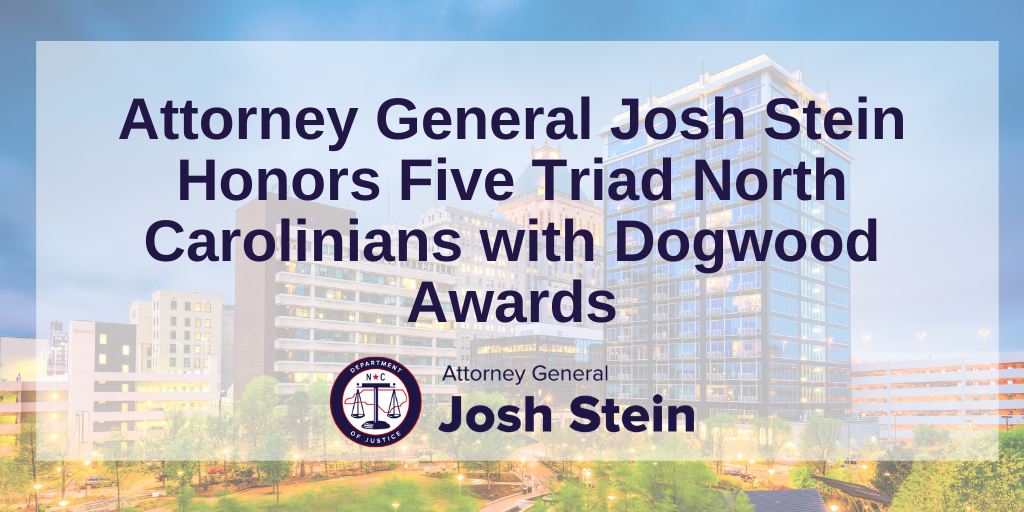 Recipients in the Triad are:

“Dr. Newell is a civil rights leader and a math professor retired from Winston-Salem State University,” said Attorney General Josh Stein. “She also recently celebrated her 105th birthday! Educators in our state are critical to help our children reach their full potential, and Dr. Newell has inspired hundreds in her many years in education. Happy birthday, and thank you for your contributions to our state.”

Dr. Virginia Newell is a civil rights leader and mathematician and served as chair of Winston-Salem University’s Department of Mathematics and Computer Science.

“Sheriff Kimbrough has been a strong partner to me and my office on a host of criminal justice issues, including combatting addiction,” said Attorney General Josh Stein. “Dedicated law enforcement leaders like him are helping get people with addiction into treatment and out of the criminal justice system. These efforts will help us turn the tide on the opioid epidemic that has devastated communities in our state.”

“Mike and Vernon have a combined nine decades as members and leaders of Teamsters, one of the largest unions in North Carolina,” said Attorney General Josh Stein. “Their work with the Teamsters ensures that workers across North Carolina who power our economy are treated fairly.”

Mike McGaha is president and Vernon Gammon is secretary-treasurer and business agent of the Teamsters Local 391.

“Too many election workers endured harassment and threats while they faithfully oversaw safe, effective elections this year,” said Attorney General Josh Stein. “Michella has shown incredible commitment to democracy and the truth as she refused to buckle to those who lie about stolen elections. Despite harassment, she continues to work hard to administer elections in her county and maintain integrity in our elections.”

Michella Huff is director of the Surry County Board of Elections.