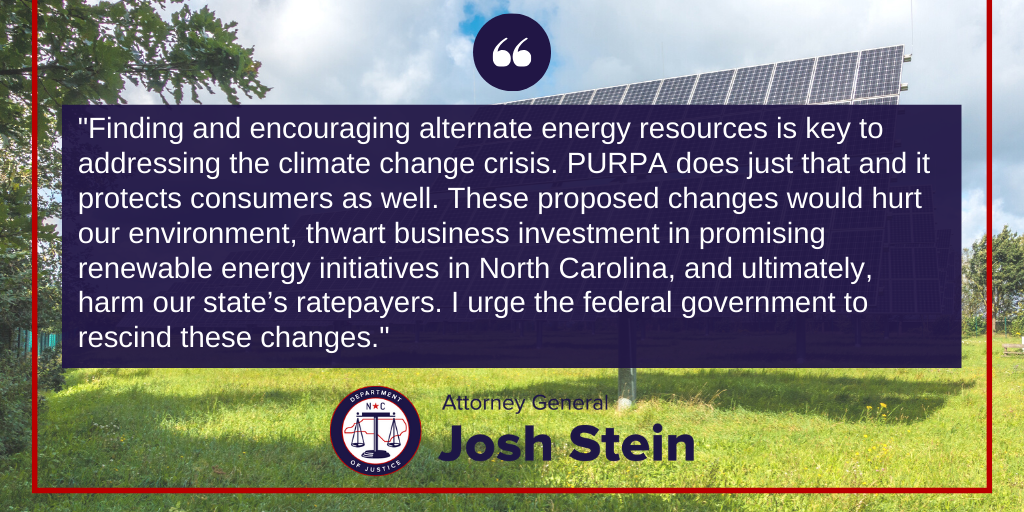 (RALEIGH) Attorney General Josh Stein opposed proposed changes that would undercut the Public Utility Regulatory Policies Act (PURPA), a federal law that has been instrumental in combatting climate change by developing renewable energy resources and ensuring just and reasonable electricity rates for ratepayers. Attorney General Stein filed two sets of comments with the Federal Energy Regulatory Commission (FERC)—he wrote on behalf of North Carolina in his first set of comments, sharing North Carolina’s experience as the state with the second-highest installed solar capacity in the country, and also joined seven other attorneys general in filing a second a set of general comments.

“Finding and encouraging alternate energy resources is key to addressing the climate change crisis,” said Attorney General Josh Stein. “PURPA does just that and it protects consumers as well. These proposed changes would hurt our environment, thwart business investment in promising renewable energy initiatives in North Carolina, and ultimately, harm our state’s ratepayers. I urge the federal government to rescind these changes.”

In his comments on behalf of North Carolina, Attorney General Stein shared two specific concerns about the proposed changes that could harm North Carolina’s environment and economy. He raised concerns that these changes will make it difficult for developers to successfully finance renewable energy projects, and he also highlighted how changes to the “one-mile rule” could make FERC qualification uncertain for projects within 10 miles of another qualifying facility. Both of these changes would negatively impact businesses in North Carolina that are focused on renewable energy projects and hurt the overall economy of the state.

In comments filed alongside seven other attorneys general, Attorney General Stein also emphasized the crucial role PURPA plays in helping states meet their clean energy and greenhouse gas emissions reduction goals. The coalition argues that any proposed changes to FERC’s regulations implementing PURPA that go against the law’s objectives of encouraging the development of alternative energy sources, including wind and solar power, and maintaining fair electricity rates for ratepayers, are unlawful and should be rejected.

The coalition further argues that FERC should not restrict the states’ abilities to implement creative policies that are consistent with PURPA’s objective to foster investment in renewable energy projects. Enacted more than 40 years ago, PURPA still plays an important role in helping states reduce emissions of harmful greenhouse gases by providing owners of clean energy projects with an opportunity to sell their renewable energy and capacity to public utilities. The law has enhanced competition in the wholesale energy market, which helps to ensure fair and affordable rates for ratepayers. The attorneys general argue that FERC should not implement any changes that would reduce these important benefits.

A copy of Attorney General Stein’s comments is available here.

A copy of the coalition’s comments is available here.