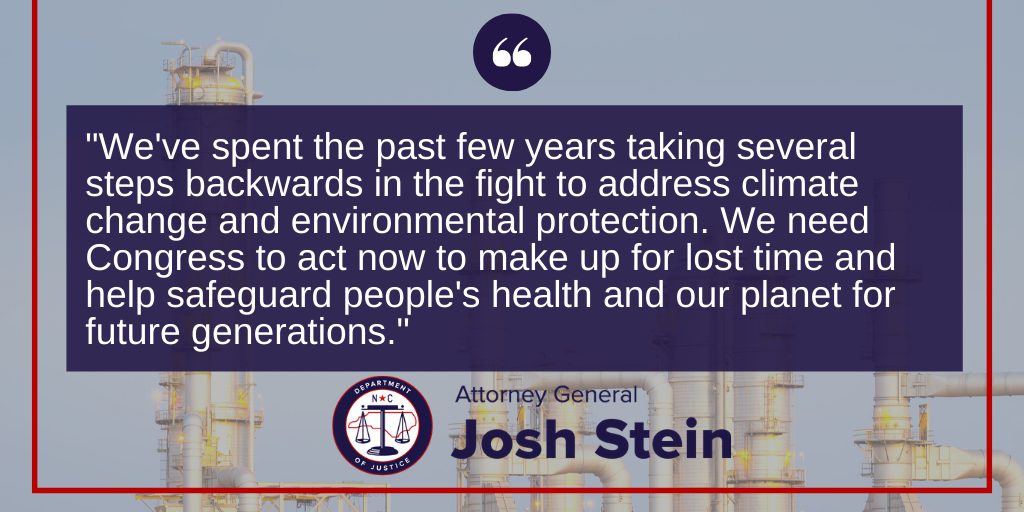 (RALEIGH) Attorney General Josh Stein urged Congress to invalidate the Rescission Rule, an Environmental Protection Agency (EPA) regulation under the Trump administration that eliminates key limits on pollutants from oil and gas facilities that contribute to climate change and smog. Oil and natural gas facilities are currently the single largest industrial source of methane emissions and contribute to smog pollution that triggers asthma attacks and can cause premature death.

“We’ve spent the past few years taking several steps backwards in the fight to address climate change and environmental protection,” said Attorney General Josh Stein. “We need Congress to act now to make up for lost time and help safeguard people’s health and our planet for future generations.”

As detailed in the coalition’s letter, the Rescission Rule removed methane emission standards for new (including modified and reconstructed) oil and gas facilities that the EPA had issued in 2016 pursuant to the Clean Air Act. The coalition is asking Congress to promptly pass resolutions disapproving the Rescission Rule, which would reinstate the 2016 rule and also allow states to do more to limit methane emissions from existing facilities.

The 2016 rule ensured new oil and natural gas facilities would apply common sense, cost-effective measures to control emissions of methane, an extremely potent greenhouse gas, and volatile organic compounds (VOCs), a component of smog. Importantly, the rule required the methane emission standards apply to similar equipment used in the production, processing, and transmission and storage segments of new oil and gas facilities. According to the EPA, the 2016 rule was expected to reduce emissions of methane by 510,000 tons , emissions of VOCs by 210,000 tons , and emissions of hazardous air pollutants by 3,900 tons in 2025 alone, and result in net benefits of $170 million to the economy in 2025. In contrast, adopting the Rescission Rule in 2020 would increase pollution emissions from new oil and gas facilities, including 448,000 more tons of methane, 12,000 more tons of VOCs, and 400 more tons of hazardous air pollutants by 2030.