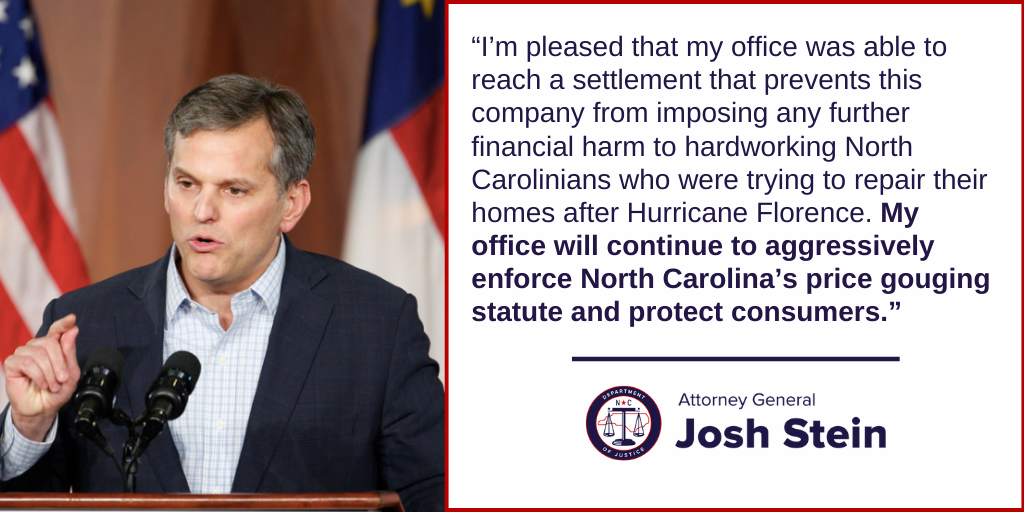 (RALEIGH) Attorney General Josh Stein today announced a settlement with Boise Disaster Services LLC/Servpro of Boise, an Idaho-based water damage restoration company, over a price gouging investigation he launched in 2019 in the wake of Hurricane Florence.

“I’m pleased that my office was able to reach a settlement that prevents this company from imposing any further financial harm to hardworking North Carolinians who were trying to repair their homes after Hurricane Florence,” said Attorney General Josh Stein. “My office will continue to aggressively enforce North Carolina’s price gouging statute and protect consumers.”

Attorney General Stein began investigating Servpro of Boise after receiving complaints about it overcharging for water damage cleanup work from residents in a condo building in Pender County. Prior to the investigation, Servpro filed a lien action against the condo owners seeking nearly $100,000 from them.

The settlement results in the dismissal of Servpro of Boise’s lawsuit against the homeowners and cancels all of their outstanding balances, totaling more than $100,000. It also prohibits the company from engaging in actions that violate North Carolina’s Unfair and Deceptive Trade Practices Act and price gouging statute in the future.

After Hurricanes Michael and Florence devastated North Carolina in 2018, Attorney General Stein brought seven lawsuits against 22 defendants under North Carolina’s price gouging statute. He has obtained eight judgments against 17 defendants, including a $274,000 settlement that was the largest price gouging settlement in the department’s history. The Attorney General’s Office has won more than $825,000 in these judgments and the settlement announced today, including: