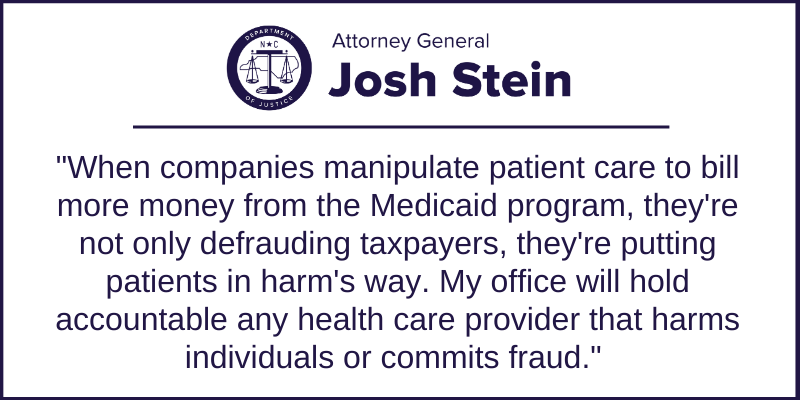 (RALEIGH) Attorney General Josh Stein today announced a $117 million settlement with Universal Health Services, Inc. (UHS, Inc.) and UHS of Delaware Inc. to settle allegations of conduct violating the Federal False Claims Act and the North Carolina False Claims Act and resulting in the submission of false claims to the North Carolina Medicaid program. UHS, Inc. is a for-profit holding company that owns assets or stocks of inpatient and residential psychiatric and behavioral health facilities, and together with its subsidiaries is one of the nation’s largest providers of hospital and health care services. The North Carolina Medicaid program will receive $3,131,988.14 from the settlement, which includes 47 other states, territories, and the federal government.

The settlement resolves allegations that from Jan. 1, 2007, to Dec. 31, 2018, UHS and some of its entities submitted or caused the submission of false claims for services provided to Medicaid beneficiaries.

These false claims resulted from UHS’s:

A National Association of Medicaid Fraud Control Units (NAMFCU) Team participated in the investigation and settlement negotiations on behalf of the states and included representatives from the Offices of the Attorneys General for the states of California, Florida, Indiana, Massachusetts, North Carolina, Ohio, Texas, and Virginia.