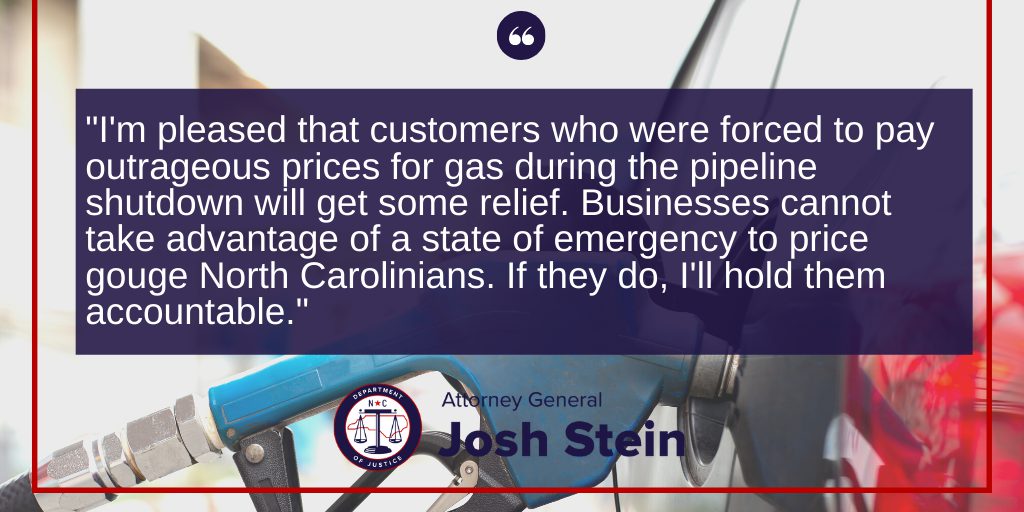 (RALEIGH) Attorney General Josh Stein reached a $20,305.58 settlement with Mansa Travel Center Charlotte LLC, which does business as Queen’s Market, after he sued them in August for allegedly violating North Carolina’s price gouging law during the Colonial Pipeline shutdown and state of emergency. Customers who were forced to pay unreasonably high prices for gasoline at Queen’s Market are eligible for restitution. In addition to the payments, the judgment also requires the defendant to permanently install software that records the prices at which it sells gas and the number of gallons sold at each price.

“I’m pleased that customers who were forced to pay outrageous prices for gas during the pipeline shutdown will get some relief,” said Attorney General Josh Stein. “Businesses cannot take advantage of a state of emergency to price gouge North Carolinians. If they do, I’ll hold them accountable.”

Consumers who purchased gasoline from Queen’s Market between May 11 and 14, 2021, and believe they were charged an excessive price, may request a claim form by emailing PGSettlements@ncdoj.gov or calling the Attorney General’s Office toll-free within NC at 1-877-5-NO-SCAM.

Attorney General Stein’s lawsuit alleged that Queen’s Market raised prices for gas to as high as $9.99 per gallon for premium (a 256 percent increase). The company allegedly sold gas to customers at these excessive prices even though it hadn’t incurred similar increases in fuel costs. Concerns about the gas station’s prices went viral in May.