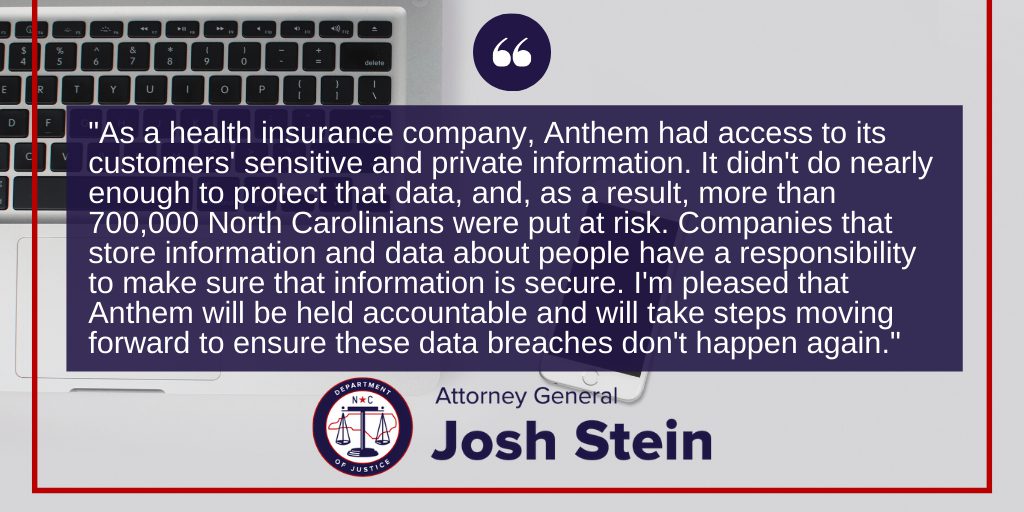 (RALEIGH) Attorney General Josh Stein today announced a $39.5 million multistate settlement with Anthem resulting from the 2014 data breach that compromised the personal information of 78.8 million Americans, including 775,606 North Carolinians. North Carolina will receive $401,172.38. In addition to the payment, Anthem has also agreed to take steps to strengthen its data security and good governance.

“As a health insurance company, Anthem had access to its customers’ sensitive and private information,” said Attorney General Josh Stein. “It didn’t do nearly enough to protect that data, and, as a result, more than 700,000 North Carolinians were put at risk. Companies that store information and data about people have a responsibility to make sure that information is secure. I’m pleased that Anthem will be held accountable and will take steps moving forward to ensure these data breaches don’t happen again.”

Under the settlement, Anthem has agreed to a series of provisions designed to strengthen its security practices going forward. These provisions include:

In addition to this settlement, Anthem previously entered into a class action settlement that established a $115 million settlement fund for affected customers – the deadline to submit claims for that fund has passed.