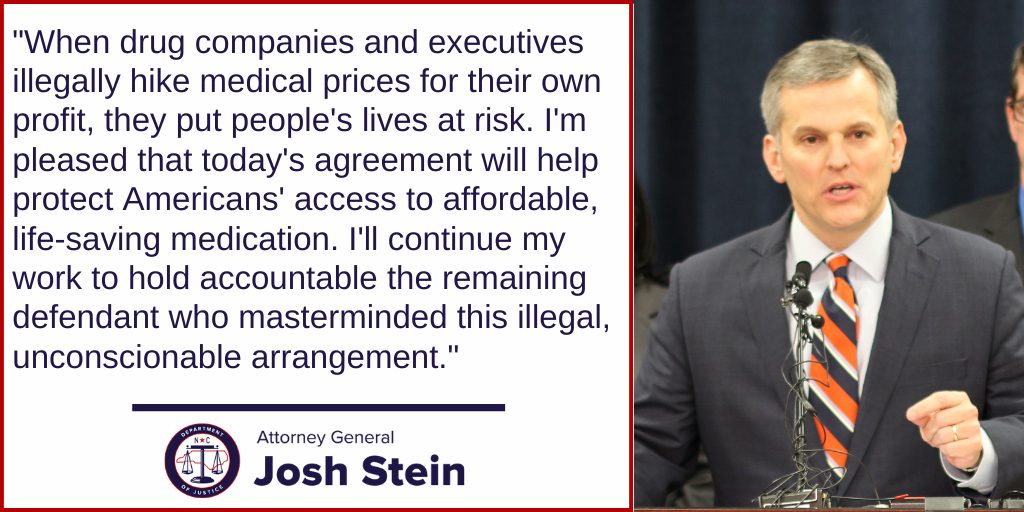 (RALEIGH) Attorney General Josh Stein today announced an agreement with Vyera Pharmaceuticals (previously Turing Pharmaceuticals) and one of its former CEOs, Kevin Mulleady, that will end its illegal and monopolistic behavior. The agreement will require Vyera to pay up to $40 million and bans Mulleady from almost any role at a pharmaceutical company for seven years. Attorney General Stein is continuing to pursue his lawsuit against “Pharma Bro” Martin Shkreli, the former Vyera CEO who was the architect of the illegal scheme.

In April 2020, Attorney General Stein took legal action against Vyera, Shkreli, and Mulleady for antitrust violations that stifled competition and permitted the defendants to protect and maintain their monopoly profits from their more than 4,000 percent overnight increase of the cost of the drug Daraprim (pyrimethamine) to $750 per pill. Daraprim is used to treat the parasitic disease toxoplasmosis, and, until relatively recently, was the only approved source of this life-saving medication by the U.S. Food and Drug Administration.

Before Mulleady and Shkreli’s involvement, Daraprim was cheap and accessible for decades. Then, in August 2015, Vyera purchased the drug, increased the price dramatically overnight, altered its distribution, and engaged in other conduct to delay and impede generic competition — all so that it could maintain the new sky-high price. The high price and distribution changes limited access to the drug, forcing many patients and physicians to make difficult and risky decisions for the treatment of a life-threatening disease. Vyera, Shkreli, and Mulleady perpetrated their illegal scheme with the intent and effect of delaying entry by lower cost generic competitors through restrictive distribution, supply agreements, and data secrecy.

The terms of today’s agreement include a strict injunction against both the corporate defendant and Mulleady to avoid repetition of a similar scheme. In addition to the up to $40 million Vyera will pay for its wrongdoing and Mulleady’s seven-year ban from the pharmaceutical industry, Mulleady has also agreed to limit his shareholdings in any pharmaceutical company to nominal amounts for 10 years.

Attorney General Stein is joined in today’s agreement by the Attorneys General of New York, California, Illinois, Ohio, Pennsylvania, and Virginia, and the Federal Trade Commission.

A copy of the agreement is available here.