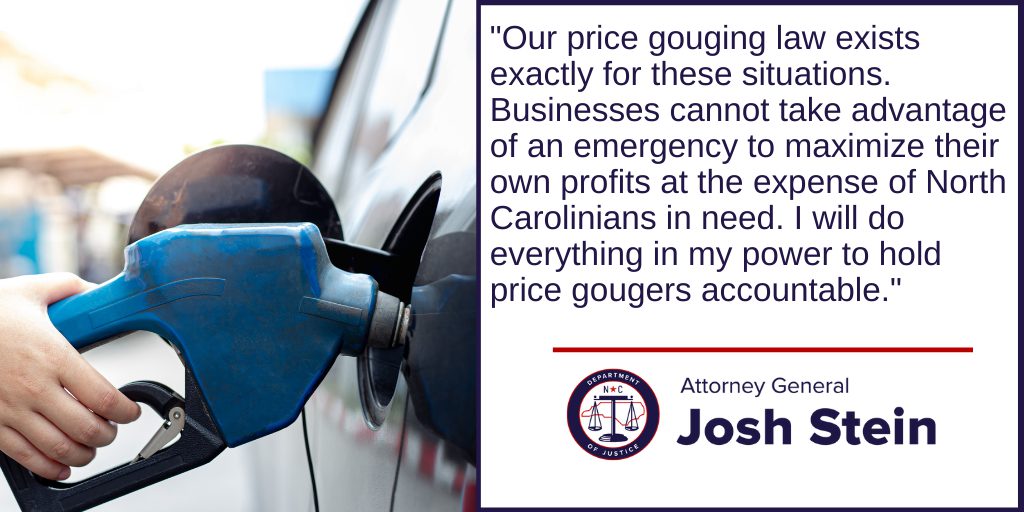 (RALEIGH) Attorney General Josh Stein today sued Jack’s In & Out Food Mart in Durham for allegedly violating North Carolina’s price gouging law and the Unfair and Deceptive Trade Practices Act during the state of emergency caused by the Colonial Pipeline shutdown in May.

“Our price gouging law exists exactly for these situations,” said Attorney General Josh Stein. “Businesses cannot take advantage of an emergency to maximize their own profits at the expense of North Carolinians in need. I will do everything in my power to hold price gougers accountable.”

In his lawsuit, Attorney General Stein alleges that the company increased the price of gas from $3.29 per gallon for premium fuel on May 9, to $5.499 on May 11 – Gov. Cooper declared a state of emergency related to the shutdown on May 10. The defendant’s price for gas increased by 60 percent, even though there was no correlating increase in how much the company was paying for fuel. Attorney General Stein also alleges that the defendant advertised regular gas for $2.909 a gallon, when in fact they were not selling regular gasoline at all, but only premium at an unreasonably excessive price.

North Carolina’s law against price gouging goes into effect when the governor declares a state of emergency. Sometimes, businesses and industries that are heavily impacted have to pay more to resupply, which can impact their prices, but they should disclose these increases and allow people to make informed purchasing decisions. Businesses cannot, however, unreasonably raise the price of goods or services to profit from a state of emergency.