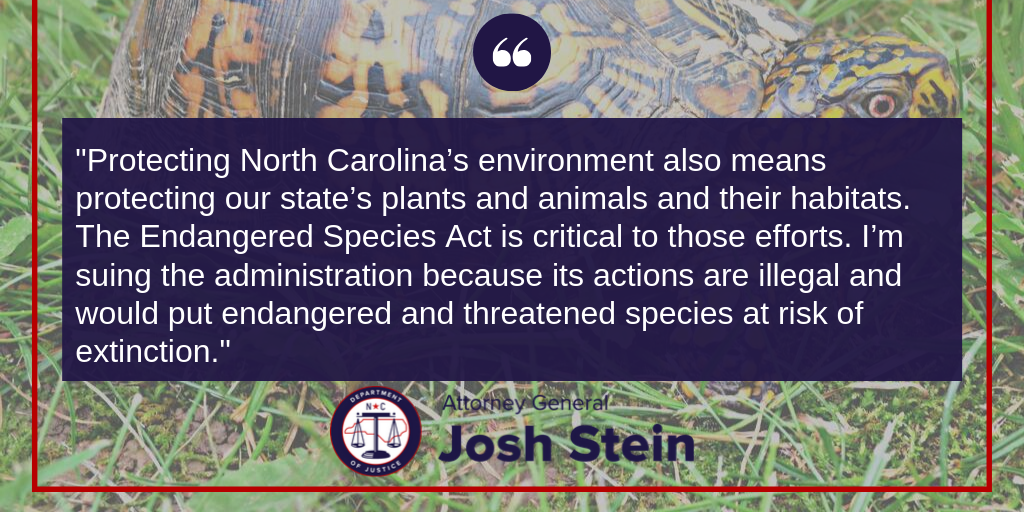 (RALEIGH) Attorney General Josh Stein today filed a lawsuit challenging the Trump administration’s rollback of the Endangered Species Act, arguing that three new rules are unlawful and undermine the key requirements of the law. In North Carolina, 64 plant and animal species are listed as endangered or threatened under the Act.

“Protecting North Carolina’s environment also means protecting our state’s plants and animals and their habitats. The Endangered Species Act is critical to those efforts,” said Attorney General Josh Stein. “I’m suing the administration because its actions are illegal and would put endangered and threatened species at risk of extinction.”

For more than 45 years, the Endangered Species Act has protected thousands of iconic and threatened species, including the bald eagle, California condor, grizzly bear, and humpback whale. However, the U.S. Fish and Wildlife Service and the National Marine Fisheries Service’s decision to finalize three rules would dramatically weaken current protections and reduce federal enforcement and consultation, putting these endangered species and their habitats at risk of extinction.

In their lawsuit, the coalition of 18 attorneys general challenge that the rules are arbitrary and capricious under the Administrative Procedure Act, unauthorized under the Endangered Species Act, and unlawful under the National Environmental Policy Act. They raise concern that the federal government’s actions would:

A copy of the lawsuit is available here.