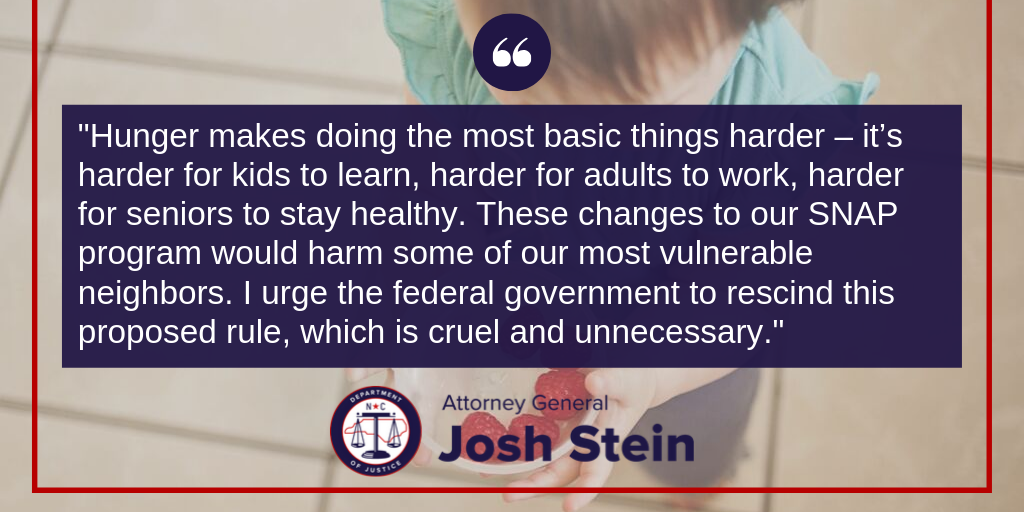 (RALEIGH) Attorney General Josh Stein today opposed the Trump administration’s proposed changes to the Supplemental Nutrition Assistance Program (SNAP), which would take basic food assistance away from more than three million people, disqualify hundreds of thousands of children from free school meals, and punish working families with modest savings. In a comment letter to the U.S. Department of Agriculture, Attorney General Stein and 23 other attorneys general argue that the proposed rule would violate federal law and harm the states, their residents, their local economies, and public health.

“Hunger makes doing the most basic things harder – it’s harder for kids to learn, harder for adults to work, harder for seniors to stay healthy,” said Attorney General Josh Stein. “These changes to our SNAP program would harm some of our most vulnerable neighbors. I urge the federal government to rescind this proposed rule, which is cruel and unnecessary.”

The SNAP program gives people with limited incomes the opportunity to access nutritious food that they otherwise would not have access to and is a crucial part of efforts to help lift people out of poverty. Based on federal guidelines, each state designs its own process for how low-income people can apply for SNAP benefits. The states must track whether participants meet the income and asset requirements for the program on a monthly basis. The Trump administration’s proposed rule would eliminate the long-standing “broad based categorical eligibility” (BBCE) policy that allows states to consider local economic factors – like high costs of living or costs of childcare – when determining SNAP eligibility, and allows states to adopt less restrictive asset limits so that families, seniors, and people with disabilities can have some savings without losing food aid.

This proposed rule is the latest in a series of unlawful attempts by the Trump administration to cut important safety-net programs. The coalition argues in the letter that the proposed rule harms the states by: