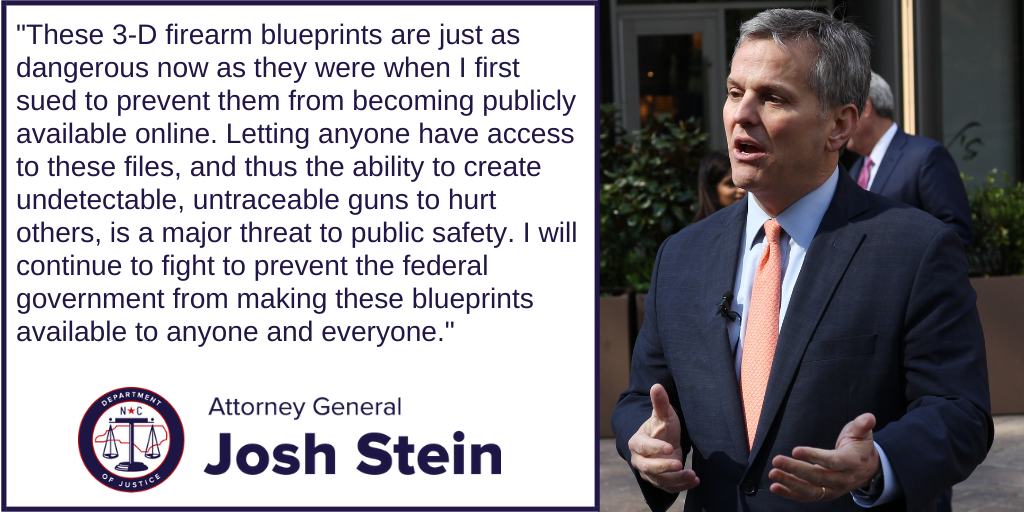 (RALEIGH) Attorney General Josh Stein joined a federal lawsuit to challenge the federal government’s latest effort to allow 3-D printed firearm blueprints to be released online. These files would allow plug-and-play access to 3-D printed unregistered, untraceable, hard-to-detect firearms, also known as “ghost guns.” Even though they are plastic, the guns can still cause major harm.

“These 3-D firearm blueprints are just as dangerous now as they were when I first sued to prevent them from becoming publicly available online,” said Attorney General Josh Stein. “Letting anyone have access to these files, and thus the ability to create undetectable, untraceable guns to hurt others, is a major threat to public safety. I will continue to fight to prevent the federal government from making these blueprints available to anyone and everyone.”

In 2015, Defense Distributed, an online company, sued the Obama administration after being forced by the U.S. State Department to remove instruction manuals on printing 3-D firearm files from the internet. The federal government successfully argued before federal trial and appellate courts that posting the files online violates firearm export laws and poses a serious threat to national security and public safety. Then, in an abrupt reversal, the Trump administration settled the case on June 29, 2018. As part of the settlement, the Trump administration agreed to allow unlimited public distribution on the internet of the downloadable files for 3-D printed guns.

Attorney General Stein previously joined a multistate lawsuit in August 2018 and successfully prevented the release of the files. Now, the Trump administration has embarked on a new effort to pursue formal rules that would transfer regulations of 3-D printed guns from the U.S. State Department to the U.S. Department of Commerce, effectively allowing their unlimited distribution.