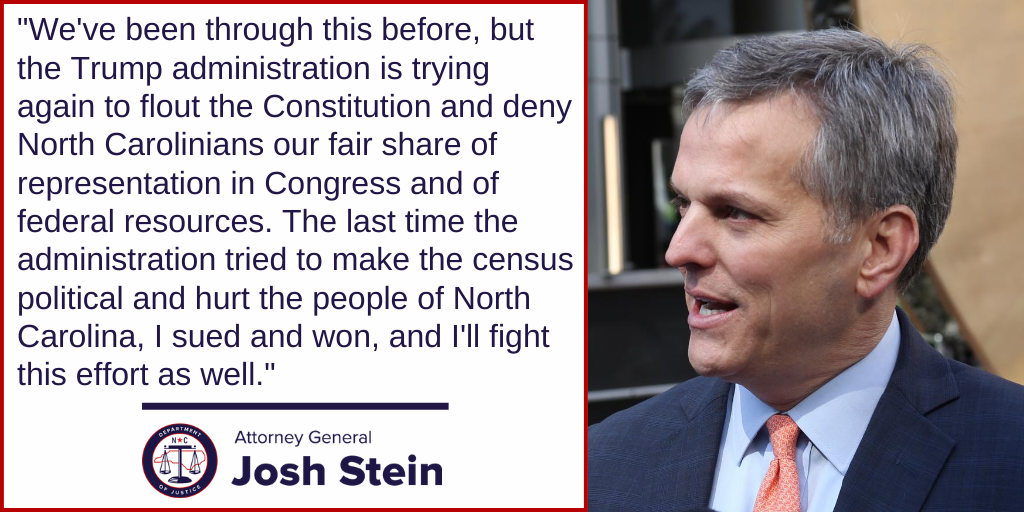 (RALEIGH) Attorney General Josh Stein today filed a lawsuit against the Trump administration for once again attempting to illegally politicize the 2020 census and deny North Carolinians fair representation in the U.S. House of Representatives. The lawsuit is a response to a memo issued by the administration earlier this week that calls for undocumented immigrants to be excluded from the apportionment base, the count of people that determines the number or U.S. House of Representatives members each state receives.

“We’ve been through this before, but the Trump administration is trying again to flout the Constitution and deny North Carolinians our fair share of representation in Congress and of federal resources,” said Attorney General Josh Stein. “The last time the administration tried to make the census political and hurt the people of North Carolina, I sued and won, and I’ll fight this effort as well.”

The Constitution is abundantly clear: For purposes of apportioning members of the House of Representatives among the states, every person residing in the U.S. during the census, regardless of legal status, must be counted. The president’s announcement is clearly intended to promote fear and deter participation in the census by immigrants and their families, as it comes just weeks before enumerators are scheduled to go into the field to encourage households to respond to the census.

In today’s lawsuit, Attorney General Stein and a coalition of 20 other attorneys general as well additional cities and counties, argue that the administration’s actions violate the Fourteenth Amendment, the due process clause of the Fifth Amendment, the Tenth Amendment, the Administrative Procedure Act, and Supreme Court precedent. The coalition contends that apportionment based on a population count that unlawfully excludes undocumented immigrants will: