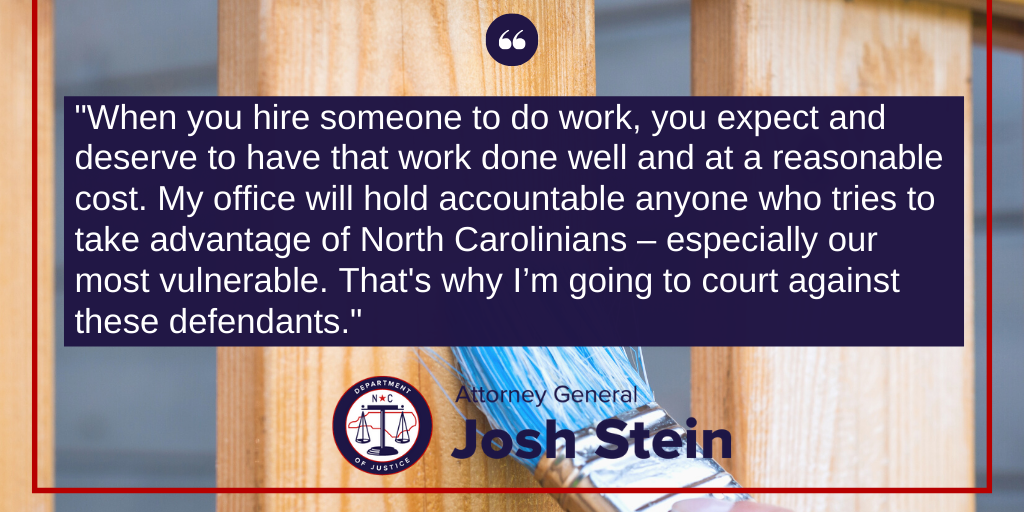 “When you hire someone to do work, you expect and deserve to have that work done well and at a reasonable cost,” said Attorney General Josh Stein. “My office will hold accountable anyone who tries to take advantage of North Carolinians – especially our most vulnerable. That’s why I’m going to court against these defendants.”

Attorney General Stein’s lawsuit alleges that Garcia, an unlicensed general contractor, manipulated vulnerable elderly homeowners by presenting himself as a devout family man and licensed contractor and building seemingly sincere relationships with the homeowners. Many of these elderly homeowners suffer from age-related health issues, including cognitive impairments such as dementia, and rely on fixed incomes.  After befriending the victims and gaining their trust, Garcia convinced them to hire him to complete home repairs and improvements that were often unnecessary and that he usually failed to complete. He also talked the victims into engaging him for additional, overpriced, and unnecessary projects. After obtaining verbal approval to complete a project, Garcia did not always follow up with a written contract—but when he did, the contract was vague and incomplete. In the rare instances where work was completed, it was often substandard and failed to meet code standards.

In one instance, between September and December 2018, Garcia convinced a 76-year-old woman in Chapel Hill with dementia to hire him to repair her roof, replace her gutters, install hardwood floors, and refurbish her deck and side porch. She paid Garcia more than $250,000 from her retirement accounts for work and materials that were later independently valued to be between $29,000 and $45,000.

If customers discovered the fraud and refused to continue paying Garcia, he allegedly responded with denials, excuses, and threats. Garcia has also borrowed money from his victims, and has failed to pay back most of these loans.

Garcia is currently incarcerated for violating a consent order with the North Carolina Licensing Board for General Contractors that barred him from doing general contracting work in North Carolina until he was properly licensed. However, during Garcia’s incarceration, Flores has allegedly been contacting existing customers and demanding payments, even though no work is being done and Garcia has already absconded with substantial monies from these customers. Garcia and Flores are also facing charges from the U.S. Attorney in the Middle District of North Carolina for criminal conspiracy to commit wire fraud, while Garcia faces additional misdemeanor and felony charges in North Carolina.

Attorney General Stein is seeking a temporary restraining order, preliminary injunction, other injunctive relief, civil penalties, restitution for victims, and attorneys’ fees. Anyone who believes they have been the victim of a scam by these defendants or any other should file a complaint with Attorney General Stein’s office here.