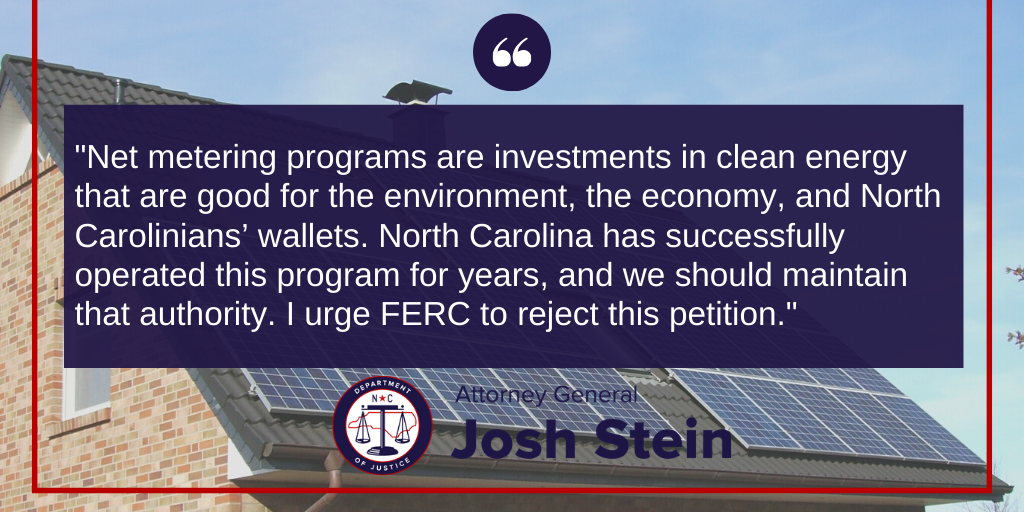 (RALEIGH) Attorney General Josh Stein today called on the Federal Energy Regulatory Commission (FERC) to reject a petition seeking to end state net metering programs. Net metering allows customers who generate their own clean electricity via rooftop solar panel installations or other sources to lower their retail electricity bill by offsetting the amount of electricity they use with the amount they produce for others. In addition to sending a protest to FERC opposing the petition, Attorney General Stein also sent another letter to FERC urging the commission to reaffirm the authority of states to regulate net metering.

“Net metering programs are investments in clean energy that are good for the environment, the economy, and North Carolinians’ wallets,” said Attorney General Josh Stein. “North Carolina has successfully operated this program for years, and we should maintain that authority. I urge FERC to reject this petition.”

The states’ protest argues that a petition asking FERC to assert federal jurisdiction over 45 state net metering programs is unlawful and would improperly overturn nearly 20 years of precedent recognizing state authority to implement net metering programs, including the authority to set rates, terms, and conditions. The petition was filed by the New England Ratepayers Association (NERA), a corporate trade association that keeps its members and donors a secret and has a history of opposing state environmental regulation and renewable energy projects.

In their filing, the states argue that NERA’s petition:

For nearly 40 years, state laws have allowed net metering or the assessing of retail service charges that reflect a customer’s net energy usage during a billing period. Net metering plays a critical role in helping states achieve their climate goals by encouraging investment in clean energy generation by homeowners, small and large businesses, municipalities, and industrial customers. The solar industry has created more than 240,000 jobs nationwide, largely due to net metering programs. North Carolina is the second-highest ranked state in the nation in installed solar.

A copy of the protest is available here.