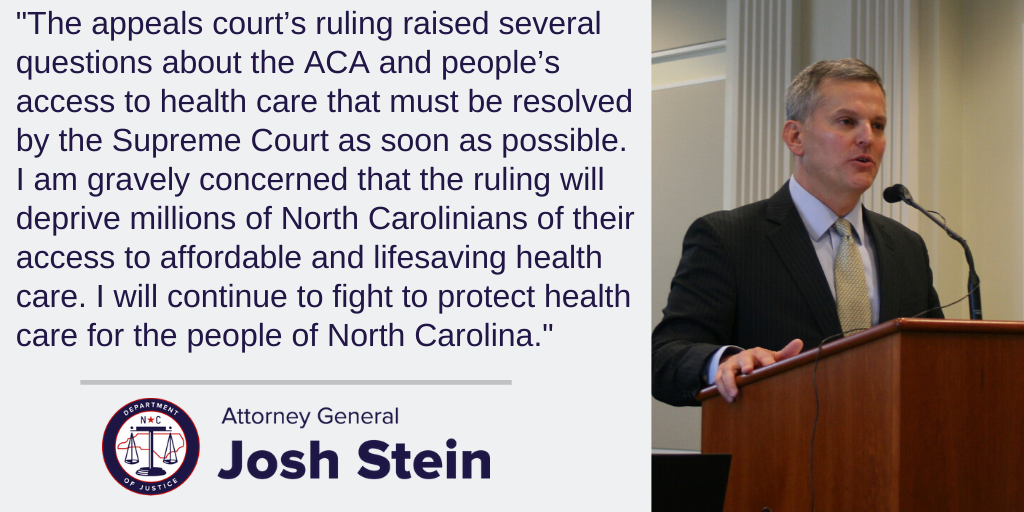 (RALEIGH) Attorney General Josh Stein today filed a petition to the United States Supreme Court seeking review of the U.S. Court of Appeals for the Fifth Circuit’s decision in Texas v. United States that held that the Affordable Care Act’s (ACA) individual mandate was unconstitutional and called into question whether the remaining provisions of the ACA could still stand. Because this decision causes uncertainty that may harm the health of millions of Americans, as well as doctors, clinics, patients, and the health care market, Attorney General Stein, joined by a coalition of 19 other states and the District of Columbia, petitioned the Supreme Court to take up the case and resolve it before the end of the Court’s current term in June.

“The appeals court’s ruling raised several questions about the ACA and people’s access to health care that must be resolved by the Supreme Court as soon as possible,” said Attorney General Josh Stein. “I am gravely concerned that the ruling will deprive millions of North Carolinians of their access to affordable and lifesaving health care. I will continue to fight to protect health care for the people of North Carolina.”

The lawsuit, originally filed by 18 states and supported by the Trump administration, argued that Congress rendered the ACA’s individual mandate unconstitutional when it reduced the penalty to $0 and that the rest of the ACA should be held invalid as a result of that change. Attorney General Stein and the coalition defended the ACA in its entirety, supported by a bipartisan group including scholars, economists, public health experts, hospital and provider associations, patient groups, counties, and cities. The Fifth Circuit held that the individual mandate is unconstitutional, but declined to further rule on the validity of the ACA’s remaining provisions. The court instead sent the case back to the Northern District of Texas to determine which provisions of the 900-page law are still valid.

Today’s filing by the coalition states makes clear that patients, doctors, hospitals, employers, states, pharmaceutical companies and more will be impacted by the looming uncertainty of the Fifth Circuit’s decision. It asks the Supreme Court to review the case this term.

The ACA is vital for millions of North Carolinians’ health care. Between 2010 and 2015, more than 500,000 North Carolinians gained health insurance coverage through the ACA. Another 70,000 individuals were able to stay covered on their parents’ insurance. Nearly 5 million North Carolinians benefit from protections against discrimination against pre-existing conditions, and about 1.8 million seniors in North Carolina save more than $1,000 a year on drug prices as a result of the ACA.

Attorney General Stein is joined in filing today’s petition by the Attorneys General of California, Colorado, Connecticut, Delaware, Hawaii, Illinois, Iowa, Massachusetts, Michigan, Minnesota (by and through its Department of Commerce), Nevada, New Jersey, New York, Oregon, Rhode Island, Vermont, Virginia, and Washington, and the District of Columbia, as well as the Governor of Kentucky.

A copy of the petition to the U.S. Supreme Court is available here.