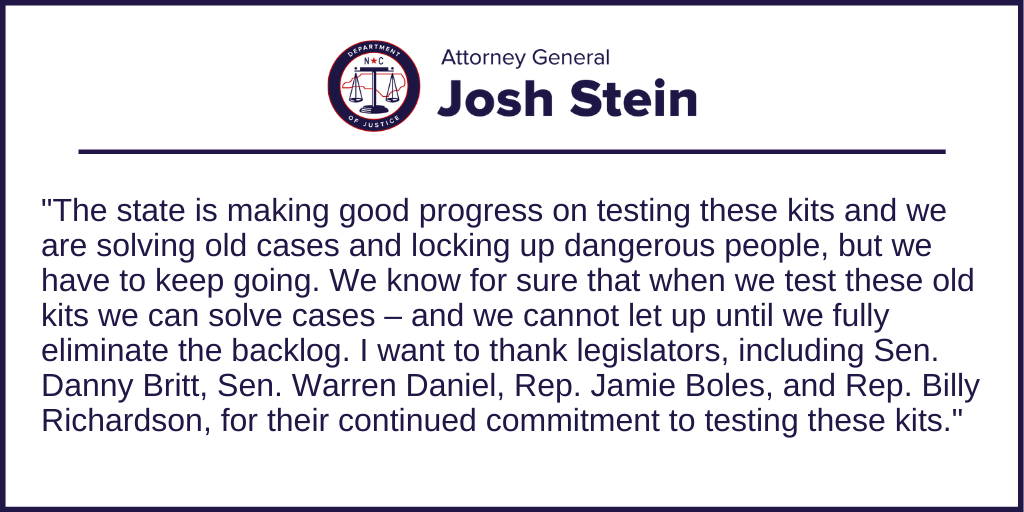 (RALEIGH) Attorney General Josh Stein today joined leaders in the legislature to provide an update on the effort to test older sexual assault kits in local law enforcement custody. Of 16,190 older kits, 8,369 have been completely tested (2,965) or are in process (5,404). Of those tested, 1,055 had samples that could be uploaded into the national database; 45 percent of those hit a profile in the database. These hits have jumpstarted many cold cases, resulting in at least 40 arrests related to at least 58 assaults, as well as other crimes including kidnapping, robbery, and attempted murder.

“The state is making good progress on testing these kits and we are solving old cases and locking up dangerous people, but we have to keep going,” said Attorney General Josh Stein. “We know for sure that when we test these old kits we can solve cases – and we cannot let up until we fully eliminate the backlog. I want to thank legislators, including Sen. Danny Britt, Sen. Warren Daniel, Rep. Jamie Boles, and Rep. Billy Richardson, for their continued commitment to testing these kits.”

“We have made considerable headway on bringing justice to survivors that have long been waiting to see their kits tested,” Senator Warren Daniel (R-Burke) said. “It should never have gotten to a point where thousands of sexual assault kits were left sitting on shelves untested, but we’ve come together to clear the backlog. I am proud of the work my legislative colleagues and the Department of Justice are doing to right this wrong.”

As states across the nation have tackled their sexual assault kit backlogs, the demand for testing at private labs has increased. As a result, the price for the vendor lab to test a kit has increased from about $700 a kit to $1,245 a kit, a jump of more than 75 percent. Further, from 2018-19 to 2019-20, the number of sexual assault kit submissions to the Lab more than doubled from 821 to 1,853. As we are testing all the old kits, the state must ensure that we never again allow another backlog to develop. The Department of Justice is requesting additional one-time funding to test kits as well as additional scientists to help keep up with law enforcement demand of the State Crime Lab.