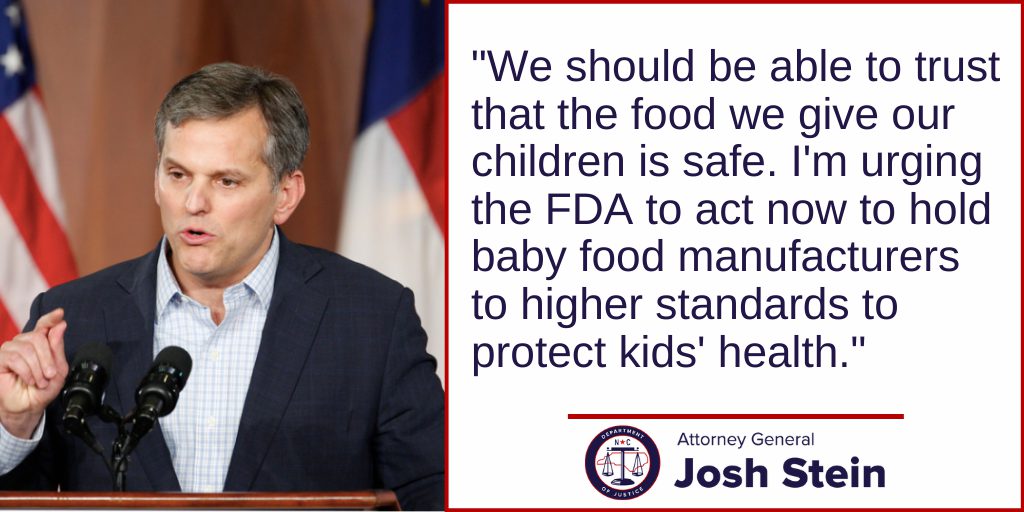 “We should be able to trust that the food we give our children is safe,” said Attorney General Josh Stein. “I’m urging the FDA to act now to hold baby food manufacturers to higher standards to protect kids’ health.”

In February 2021, the U.S. House of Representatives’ Oversight and Reform Committee’s Subcommittee on Economic and Consumer Policy published a report that determined that there are high levels of toxic heavy metals — including arsenic, lead, cadmium, and mercury — in baby foods being sold by at least four of the nation’s seven largest manufacturers. The subcommittee urged the FDA to move quickly to set limits for these metals in baby foods.

Though the FDA does set limits on toxic metals in other consumable products including bottled water, juice, and candy, the agency has failed to adequately regulate baby food. This is particularly harmful because babies and young children have smaller bodies and metabolisms that make them more vulnerable to the harmful neurotoxic effects of these metals.

While the FDA has set a plan to limit metals in baby foods sometime in the next couple weeks, it would be implemented over the next several years. Furthermore, the largest baby food brands have not publicly committed to meet voluntary targets. Attorney General Stein and 22 other attorneys general are asking the FDA to move quickly to:

A copy of the petition is available here.