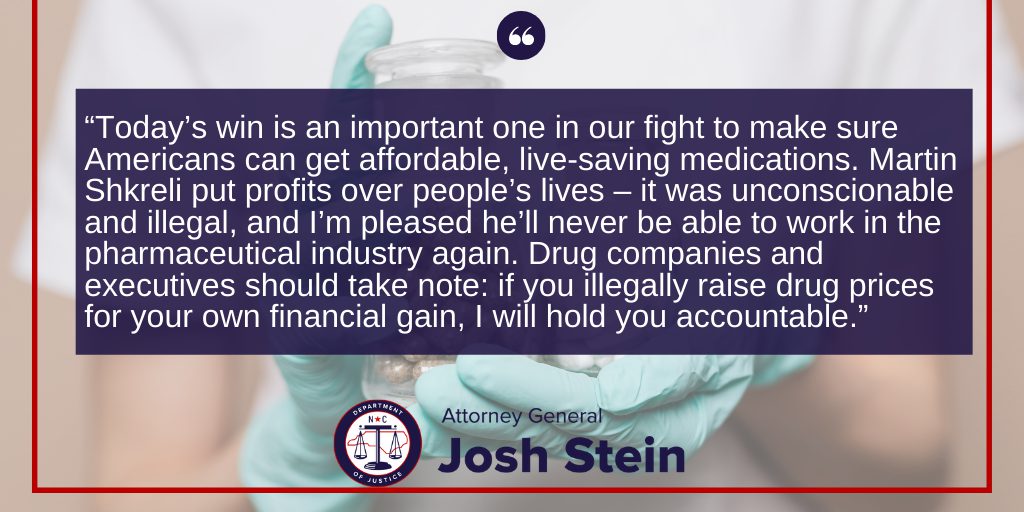 (RALEIGH) Attorney General Josh Stein today won his lawsuit against “Pharma Bro” Martin Shkreli, the former CEO of Vyera (formerly Turing) Pharmaceuticals for price-fixing and conspiracy. The judgment requires Shkreli to pay nearly $65 million and bans him from the pharmaceutical industry for life.

“Today’s win is an important one in our fight to make sure Americans can get affordable, live-saving medications,” said Attorney General Josh Stein. “Martin Shkreli put profits over people’s lives – it was unconscionable and illegal, and I’m pleased he’ll never be able to work in the pharmaceutical industry again. Drug companies and executives should take note: if you illegally raise drug prices for your own financial gain, I will hold you accountable.”

In early 2020, Attorney General Stein sued Vyera, Shkreli, and his business partner — former Vyera CEO Kevin Mulleady — for illegal and anticompetitive behavior that stifled competition and allowed the defendants to exorbitantly raise the price of Daraprim more than 4,000 percent overnight, to $750 per pill. Daraprim is used to treat the parasitic disease toxoplasmosis, and, until relatively recently, was the only approved source of this life-saving medication by the U.S. Food and Drug Administration (FDA). The high price and distribution changes limited access to the drug, forcing many patients and physicians to make difficult and risky decisions for the treatment of life-threatening diseases. A generic version was not available until March 2020.

Last month, Attorney General Stein secured an agreement that will require Vyera to pay up to $40 million and bans Mulleady from almost any role at a pharmaceutical company for seven years.

Attorney General Stein was joined in this lawsuit by the Federal Trade Commission and the attorneys general of New York, California, Illinois, Ohio, Pennsylvania, and Virginia.