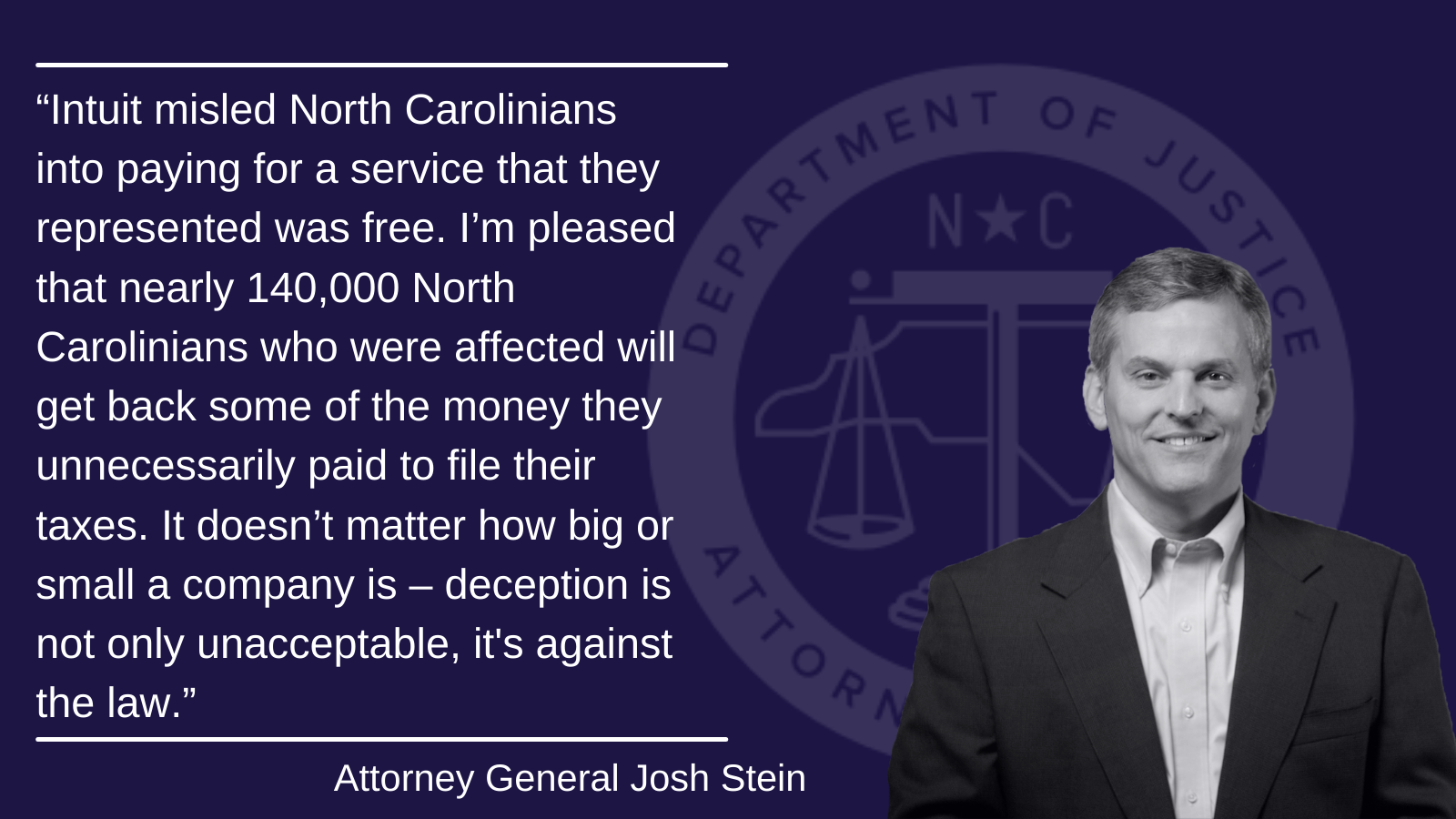 (RALEIGH) Attorney General Josh Stein today won more than $4 million from Intuit Inc. (Intuit), the owner of TurboTax, for deceiving North Carolinians into paying for tax services that should have been free. Intuit will pay $141 million in restitution to millions of consumers across the nation who were unfairly charged. In addition, Intuit must suspend TurboTax’s “free, free, free” ad campaign, which lured people with promises of free tax preparation services only to deceive them into paying for services.

“Intuit misled North Carolinians into paying for a service that they represented was free,” said Attorney General Josh Stein. “I’m pleased that nearly 140,000 North Carolinians who were affected will get back some of the money they unnecessarily paid to file their taxes. It doesn’t matter how big or small a company is – deception is not only unacceptable, it’s against the law.”

Approximately 139,000 North Carolinians who filed their federal taxes through TurboTax in 2016 to 2018 are eligible for restitution and are expected to receive a direct payment of approximately $30 they were deceived into paying for filing services – about 60 percent of the average annual fees they paid to Intuit. North Carolinians who are eligible for restitution will automatically receive notices and a payment.

However, the TurboTax “freemium” product is only free for approximately one-third of U.S. taxpayers while the IRS Free File product was free for 70 percent of taxpayers.

Attorney General Stein began investigating Intuit after ProPublica reported that the company was using deceptive digital tactics to steer people with lower incomes toward its commercial products and away from federally-supported free tax services. The multistate investigation found that Intuit engaged in several deceptive and unfair trade practices that limited consumers’ participation in the IRS Free File Program. The company used confusingly similar names for both its IRS Free File product and its commercial “freemium” product. Intuit bid on paid search advertisements to direct consumers who were looking for the IRS Free File product to the TurboTax “freemium” product instead. Intuit also purposefully blocked its IRS Free File landing page from search engine results during the 2019 tax filing season, effectively shutting out eligible taxpayers from filing their taxes for free. Moreover, TurboTax’s website included a “Products and Pricing” page that stated it would “recommend the right tax solution,” but never displayed or recommended the IRS Free File program, even when consumers were ineligible for the “freemium” product.

Intuit will pay $141 million in restitution, the majority of which will go to millions of consumers who started using TurboTax’s Free Edition for tax years 2016 through 2018 and were told that they had to pay to file even though they were eligible to file for free using the version of TurboTax offered as part of the IRS Free File program. Additionally, Intuit withdrew from the IRS Free File program in July 2021.

Intuit has also agreed to reform its business practices, including:

Attorney General Stein was part of the multistate group investigating Intuit, along with the Attorneys General of New York, Tennessee, Florida, Illinois, New Jersey, Pennsylvania, Texas, and Washington. The Federal Trade Commission also assisted in the investigation. All 50 states and the District of Columbia joined this agreement.