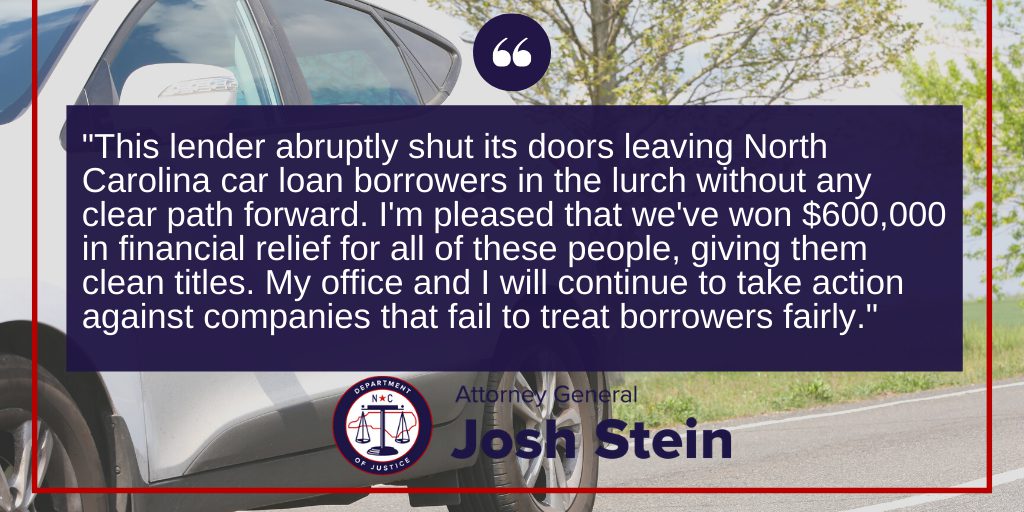 Contact:
(RALEIGH) Attorney General Josh Stein won a default judgment against Alpha Finance Company, a Sparta-based lender that closed in July 2019 and left some borrowers with outstanding secured loans that had balances and others with paid-off loans whose liens had not been cancelled by Alpha. As a result of the judgment, all consumers’ outstanding loans made under the Retail Installment Sales Act (RISA) are cancelled and all affected liens will be released. The judgment affects 282 consumer loans with outstanding balances totaling approximately $613,000. The judgment also imposed $100,000 in civil penalties against Alpha.

“This lender abruptly shut its doors leaving North Carolina car loan borrowers in the lurch without any clear path forward,” said Attorney General Josh Stein. “I’m pleased that we’ve won $600,000 in financial relief for all of these people, giving them clean titles. My office and I will continue to take action against companies that fail to treat borrowers fairly.”

Attorney General Stein sued Alpha Finance in March 2020 after alleging the company violated North Carolina’s Unfair and Deceptive Trade Practices Act and RISA. Alpha’s business under RISA consisted of making personal loans to consumers primarily for the purchase of used cars. When making these auto loans, the company secured the loans by placing a lien on the vehicle’s title with the North Carolina Division of Motor Vehicles.

The North Carolina Commissioner of Banks previously ordered Alpha to cease and desist from making loans under the Consumer Finance Act (CFA), and in an enforcement action brought by the Commissioner, the Alleghany County Superior Court ordered that all loans made by Alpha under the CFA were void and liens on CFA loans were to be released. The Commissioner of Banks does not regulate the auto purchase loans Alpha made under RISA. Attorney General Stein sued Alpha to hold it responsible for the RISA loans and get financial relief for people who were left without any guidance or loan forgiveness when the company closed abruptly.

Because of this judgment, borrowers will now be able to obtain clear titles to their vehicles, sell or transfer their vehicles, and more readily obtain credit. The loan balances on loans forgiven range from $377 to nearly $18,000, with an average loan forgiveness amount of about $5,000. Further, Alpha is permanently barred from advertising or making RISA loans; taking or transferring any security interest in collateral taken under RISA loans; collecting on any outstanding RISA loan, including repossession of any vehicles; and selling or transferring any RISA loans.