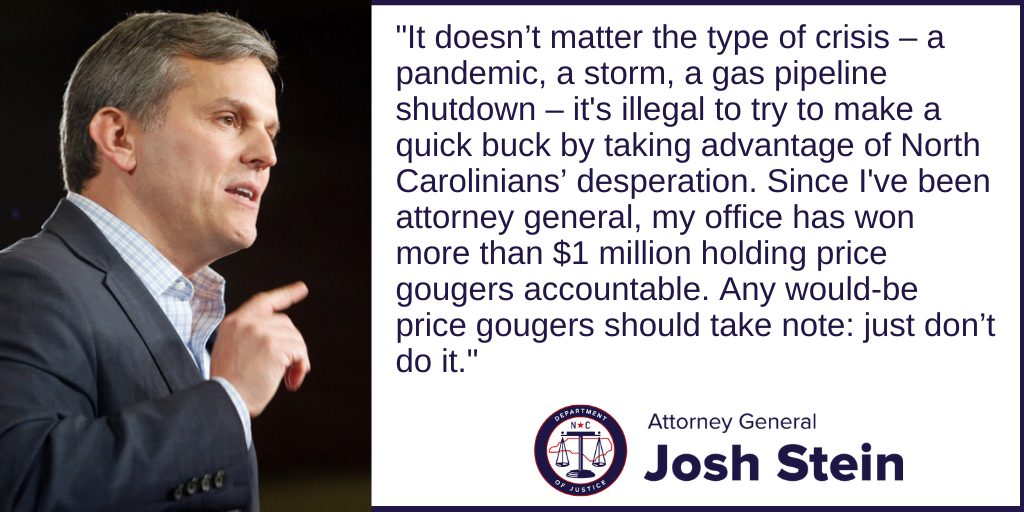 NCDOJ Has Won More Than $1 Million in Price Gouging Cases

“It doesn’t matter the type of crisis – a pandemic, a storm, a gas pipeline shutdown – it’s illegal to try to make a quick buck by taking advantage of North Carolinians’ desperation,” said Attorney General Josh Stein. “Since I’ve been attorney general, my office has won more than $1 million holding price gougers accountable. Any would-be price gougers should take note: just don’t do it.”

North Carolina’s price gouging law is currently in effect related to both the coronavirus pandemic and winter storms. Please report concerns about price gouging to the North Carolina Department of Justice by filing a complaint at https://ncdoj.gov/gouging or by calling 1-877-5-NO-SCAM.

Since 2018, Attorney General Stein has brought 11 lawsuits against 27 defendants under North Carolina’s price gouging statute. He has obtained 14 judgments or settlements totaling $1,080,000 against 25 defendants, including a $274,000 settlement that was the largest price gouging settlement in the department’s history.

More on each of the settlements announced today is below:

Attorney General Stein reached a $38,750 settlement with Florida-based Canary Tree Service and its owner Justin Hartmann after suing them in April 2019 for allegedly price gouging Wilmington-area residents after Hurricane Florence and failing to provide some customers with their three-day right-to-cancel notices. All six consumers who were harmed by Canary’s alleged price gouging will receive full restitution ranging between $4,500 and $14,000. The settlement also requires the company to ensure they are guaranteeing consumer protections including the right-to-cancel notices and price quotes.

Attorney General Stein reached a $36,881.53 settlement against Secure Restoration and its owners that will provide full restitution for each of the three homeowners who were allegedly price gouged. Attorney General Stein sued Secure Restoration in January 2019 for price gouging New Bern-area residents for water damage repairs after Hurricane Florence, including giving people verbal quotes for repair work that were thousands of dollars lower than what they were charged, submitting invoices and demanding payment for work they did not perform, and failing to guarantee people their rights as consumers.

Jack’s In and Out Mart

Attorney General Stein reached a $10,000 settlement with Jack’s In & Out Food Mart in Durham for allegedly price gouging during the Colonial Pipeline shutdown in May. Attorney General Stein sued the gas station in August alleging that it increased the price of gas from $3.29 per gallon for premium fuel to $5.499 after Gov. Cooper declared a state of emergency related to the shutdown. The defendant’s price for gas increased by 60 percent, even though there was no correlating increase in how much the company was paying for fuel.

Customers who were forced to pay unreasonably high prices for premium gasoline at this gas station on May 11, 2021, are eligible for restitution and may request a claim by emailing PGSettlements@ncdoj.gov or calling our office at 1-877-5-NO-SCAM. The defendant is also required to install and maintain software that records the prices at which it sells gas and the number of gallons sold at those prices going forward.

A copy of the settlement with Canary Tree Service is available here.

A copy of the settlement with Secure Restoration is available here.

A copy of the settlement with Jack’s In and Out Mart is available here.