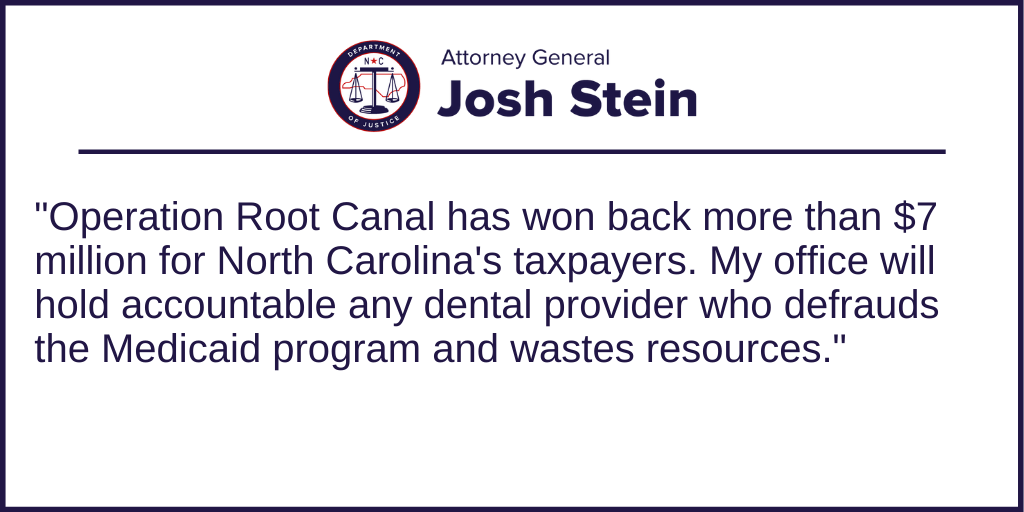 This settlement relates to a prior criminal plea the Attorney General’s Medicaid Investigations Division (MID) obtained involving Christian Ekberg of Maryland who was sentenced in February 2021 to 18 months in prison for health care fraud. In addition to his prison term, Ekberg was also ordered to pay $173,870.12 to the North Carolina Medicaid Fund as restitution. According to court documents, Christian Ekberg was an officer and minority shareholder of ProHealth Dental, an out-of-state company that entered into a practice management agreement with Henry W. Davis, Jr., D.D.S., a North Carolina dentist and Medicaid provider who provided dental services to patients living in skilled nursing facilities throughout North Carolina. Under the agreement, ProHealth Dental would provide professional management services to Dr. Davis, including submitting Medicaid claims. According to the settlement, the company submitted claims for dental services that Dr. Davis allegedly performed on Medicaid recipients between May 1, 2015, through April 1, 2017. The services were in fact not performed, not medically necessary, did not have supporting clinical documentation, and/or were performed in violation of Medicaid policy. Dr. Davis failed to adequately monitor these claims that ProHealth Dental submitted under his provider number.

Operation Root Canal involves the MID review of billing practices for a wide variety of dental services, including dental cleanings, use of nitrous oxide, repetitive restorations on the same tooth, palliative care, and upcoding of patient examinations. Through this effort, MID has settled 15 cases of Medicaid fraud among dental providers and won more than $7.2 million in settlements.

This settlement was obtained with the assistance of the North Carolina Department of Health and Human Services, Division of Health Benefits – Office of Compliance and Program Integrity and Clinical Policy Section.